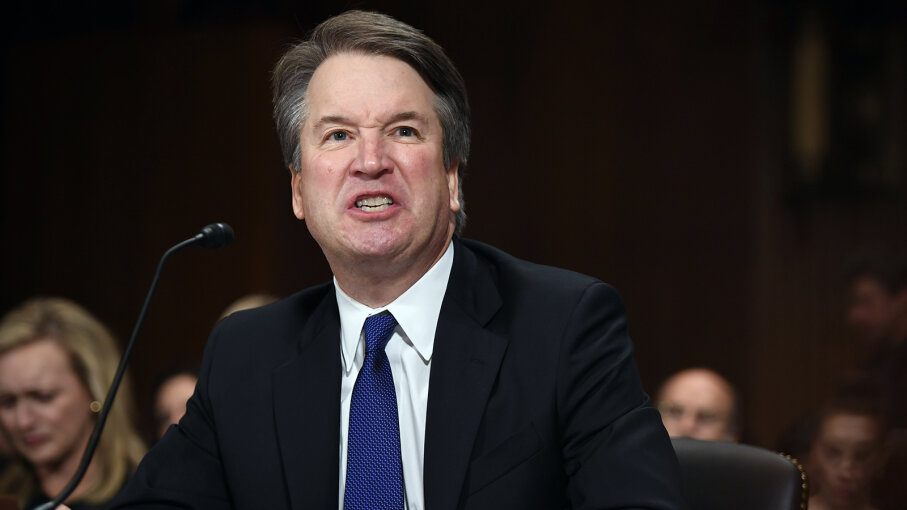 Supreme Court nominee Judge Brett Kavanaugh testified before the U.S. Senate Judiciary Committee on Sept. 27, 2018 after Dr. Christine Blasey Ford accused him of sexually assaulting her at a party in 1982. Saul Loeb-Pool/Getty Images

Making it to the bench of the Supreme Court of the United States is one sweet gig. For a judge, it's as high as you can go. It comes with a lifetime appointment. Lawyers practically bow before you. Your word is often, literally, the law. The robes are provided.

Still, getting there — not even taking into account the studying and debating and few decades of hard work that it takes — can be tough. Nominees to the country's highest court are placed under a searing microscope from the start. They go through vigorous questioning by the Senate Judiciary Committee, sometimes in very public forums.

Not everybody makes it. Not everybody even sticks around until the end of the nominating process. It's great work, yes, being a Supreme Court Justice. If you can get it.

When a U.S. president nominates someone to take over a seat on the Supreme Court, things don't always turn as contentious as they do these days. Since the Supreme Court was established in 1789, presidents have sent 163 names to the Senate for approval. The Senate has so far approved 125 of them (about 77 percent, though seven have also turned down the appointment).

Some of the nominees have faced a tougher road than others, of course. Roughly 23 percent don't make it. Some of those were outright rejected. Some nominees take their names out of consideration. The Senate didn't even bother to vote on 10 of the presidents' recommendations, most notably that of Merrick Garland who was nominated by President Barack Obama in 2016 toward the end of his second term.

Often, though, the chosen ones breeze through the process. Current Associate Justice Ruth Bader Ginsburg won a Senate vote of 96-3 in 1993. In the 1980s, President Ronald Reagan nominated three judges who were voted onto the bench unanimously, including Sandra Day O'Connor, the first woman to serve on the Court, Antonin Scalia and Anthony Kennedy.

"It's supposed to be kind of a collaboration. There's an understanding that there's deference paid to the president's nominee," says Jon Michaels, a professor at the UCLA School of Law. "So there has to be something problematic about that nominee not to go forward."

But ... welcome to now. These days, in a politically fractured nation, things aren't nearly as easy. Something problematic is always on hand. Collaboration is a dirty word.

A Republican-led Senate, at odds with President Obama in 2016, sat on Garland's nomination, refusing to even hold a hearing. When President Donald Trump took office in January 2017, and nominated Neil Gorsuch to the bench instead, Gorsuch passed the Republican-led Senate, but just barely, with a 54-45 vote, and only after Republicans changed Senate rules to prevent a Democratic filibuster.

"None of that is good for the health of the court," Michaels says.

Even getting to the Senate vote is sometimes tricky, as U.S. Circuit Court Judge Brett Kavanaugh found out in the late summer of 2018. Kavanaugh was nominated by Trump to take over the seat of retiring Supreme Court Associate Justice Anthony Kennedy, and things turned ugly quickly.

Stinging from the Garland snub and the way the Senate pushed through Gorsuch, and fearing a conservative turn that could impact Supreme Court decisions for decades, Democrats hounded Kavanaugh's nomination. And when several women, days before the Judiciary Committee vote, accused Kavanaugh of sexual assault, Democrats and a key Republican or two called to reopen the FBI background investigation into the nominee's past. An angry, teary Kavanaugh was forced to defend himself in front of a very public hearing of the Committee.

Kavanaugh isn't the first to be put through the nomination wringer. The most recent:

And there've been others. President Richard Nixon had two Supreme Court nominees rejected — Clement Haynsworth Jr. in 1970 and G. Harrold Carswell in 1969. Carswell was the first at the time to be voted down since 1930. Both were shot down for their past views on civil rights and racial equality.

We'd like to think that the Supreme Court, being the last stop on the road to justice, would be able to put aside partisanship and politics to make well-reasoned judgments on what is best for the country. But justices have views, too, and they are appointed by presidents who have their own views and voted on by representatives who want their way.

It's not surprising, then, that these nominees are put through a wringer by opposing parties. As much as we may hate to see a nominee's life turned upside down by the process, it's not just their lives on the line. It's the fate of the country.

"It is a little weird to have a system so dependent on a very partisan choice by a president when [the choice just depends] on when people die — you can just get lucky or unlucky," Michaels explains. "It would be nice in a perfect world if presidents and senators did not play power politics with the courts, but that would be naive. Especially since the court plays a central role in American political, social and economic life."

NOW THAT'S INTERESTING
The first nominee to the Supreme Court to be rejected was John Rutledge in 1795. Rutledge had been one of the original associate justices, but resigned before hearing a case to return to South Carolina. When George Washington tapped him again to serve as Chief Justice — during a Senate recess — he returned. During his brief tenure, Rutledge criticized the administration, and rumors of mental illness and alcohol abuse (spurred on by the opposing party press) were rampant. When the Senate convened and had a chance to vote, it rejected him, 14-10. He's the only "recess appointed" judge that didn't later earn a Senate nod.