The Decline and Resurgence of Totem Poles 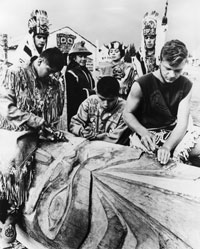 Fox Photos/Getty Images Novice artists get a lesson from experienced totem carvers in Fairbanks, Alaska, in May 1971.

About a hundred years ago, the totem carving art form began to decline due to a couple of factors, including:

In the early 20th century, totem poles were stolen from their sites on reservations for private or museum use. As a result, production nearly ceased. Very few totem poles were raised between 1910 and 1950. A grassroots effort of both native and non-native artists and scholars resurrected the art form, as well as the traditions that accompany the raising of a totem pole.

Today, totems are being carved and raised with a great resurgence. Thanks in large part to the efforts of their artists and scholarly supporters, the Native American Graves Protection and Repatriation Act was signed into law in 1990 by President George H.W. Bush. This law required museums and others in possession of improperly obtained totem poles, human remains and other American Indian artifacts to return them to their rightful owners.

It's entirely possible that totem pole production could have been extinguished had no one intervened to save the art form. But totem carving is a thriving art form once again, due to the efforts of those artists who recognized totems' importance in American Indian and North American history.

To learn more about totem poles and other American Indian art forms, follow the links below.

Ever wondered what to give the person who already has everything? Next time you have this quandary, you may consider commissioning a custom totem pole. There seems to be no shortage of carvers in North America, although their price ranges and carving styles vary substantially. According to Pat Kramer, author of "Totem Poles: An Altitude SuperGuide," authentic totem poles can be commissioned for anywhere from $25,000 to $100,000. Non-natives commission totems for a variety of reasons, including:

Inauthentic totem poles can be custom-made for less. Prior to his retirement, Steve Benson, carver and president of the Wood Age, created totems for anywhere from $750 for a three-footer to $15,000 for a 20-foot totem. To find a carver to create a custom totem to fit your needs, a simple Web search will give you dozens of options.