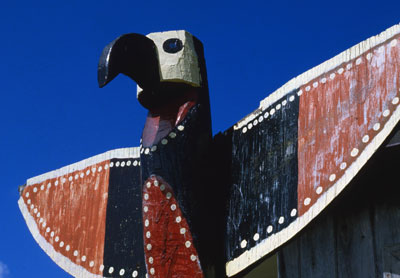 Cheryl Koenig Morgan/MPI/Getty Images The pinnacle of this totem pole from an American Indian tribe in the Everglades National Park, Florida, is carved in the shape of a bird.

As we've learned, totem poles portray an array of animal and human carvings. Some depictions are more common than others, including the thunderbird, eagle and grizzly bear. These American Indian symbols come from one of three kingdoms: sky, earth or underwater. Popular belief holds that many animals could transform into other beings -- or even into humans.

American Indians sometimes used these animals to represent an ancestor that they believed possessed this transformative ability. Or, they included a particular animal simply because they had encountered it in some meaningful way in their lives. A small sample of these animals and their symbolic interpretations include:

Eagle: Many believe the eagle to be the most useful animal because it can fly higher than other birds. The eagle is considered extremely intelligent and is able to spot trouble in advance by soaring high in the sky.

Thunderbird: This is a mythological creature with the power to create lightning with the blink of its eye and thunder by beating its wings. The thunderbird can also be invisible and create violent gusts of wind.

Bear: The bear is believed to teach natives to forage for berries and hunt wild salmon. The bear also comes to their aid in battle.

Owl: This bird represents the souls of the deceased.

Wolf: The wolf is considered very powerful. It also represents those who take care of the sick and needy.

Raven: One of the most commonly used symbols in Alaska, along with wolf, the raven is well-liked for his trickery. Despite being perceived as corrupt and hungry, the raven is the subject of more than 90 stories.

Frog: The frog is believed to bring wealth and great fortune.

In the next section, we'll take a look at some different types of totem poles, including a few record-breaking ones.

Myth: Totem poles were worshiped by natives and used to fend off evil spirits.

Truth: They are emblems, used for storytelling, not religious or mystical purposes.

Truth: Totems as we know them today have only been around for a few hundred years. They're made of wood, which decays over time.

Myth: No aboriginal tribes aside from those of the Pacific Northwest make totem poles.

Truth: Technically, this is true, although tribes in other areas of the world produce similar works of art. For example, the Ainu in northern Japan honor the gods with clusters of totem-pole-like tree trunks. And the Maori tribe in New Zealand is known for making totems to honor its ancestors