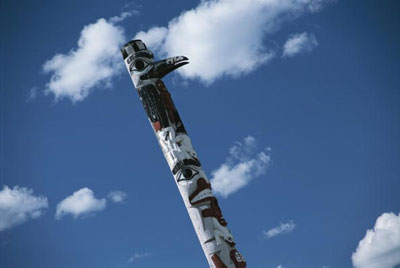 The totem pole's main purpose is to tell a story with symbols, typically animals and people. The story usually details the history and wealth of the family that commissioned it.

Traditionally, totem poles have been used to commemorate special events. Money was (and still is) a big factor in creating a totem -- they took months to make and only the very wealthy could afford them. During the totem creation process, the head carver often lived with the host family, sometimes for several months. A head carver managed two or more junior carvers during the process. The head carver was held in high esteem, and the head of the host family was responsible for making sure that he was comfortable, happy and entertained during his stay. If his needs weren't satisfied -- or if he didn't feel respected -- the carver could use his power to embarrass the pole's commissioner. For example, the carver could portray him nude on the totem pole for all to see.

Totem poles can range in size from as short as one foot to well over a hundred feet tall, although shorter poles are more common. Authentic totem poles are made from red or yellow cedar and aren't carved with chain saws or other power tools. Totems are often painted, although they don't have to be. Traditional colors include black, white, red, yellow and blue-green. According to Steve Benson, totem carver and president of the Wood Age, a 20-foot pole can take four to six weeks to make. The process takes even longer if the pole is carved without power tools or chainsaws, as so many of the authentic totems are.

Because totem poles are wooden, they're organic works of art. A totem pole is generally expected to last about a hundred years. It isn't realistic to expect a wooden creation to survive nature's harsh elements for much longer than that. Some people choose to treat the wood by waterproofing or staining it. Most totem artisans agree that truly authentic poles have no extra preservatives applied to them. If an artist restores a decaying pole, the ceremonial pole raising must be done again.

Not just anyone can make a truly authentic totem pole. A totem must meet the following standards to be considered 100 percent authentic:

Farah Nosh/Getty Images A totem pole created by a member of the Haida tribe decomposes into the earth.

The raising ceremony is a very important event. Hundreds of people gather for the celebration. After a hole is dug for the totem pole, it is carried to the site. Ropes are attached to the pole, and several people pull it into place. Onlookers dance and sing as the pole is raised and blessed.

Even today, once an authentic totem pole is completed, the raising and dedication ceremonies are followed by potlatch, a huge party thrown by the totem pole's commissioner, typically in the winter. Each attendee receives a gift from the host, with the understanding that he or she will one day return the favor. The potlatch serves to increase the commissioner's social reputation because the totem serves as a reminder of the fantastic party that he threw.

But what do these towering works of art mean? In the next section, we'll examine some common symbols used on totem poles.