Browse the article How Tipping Works 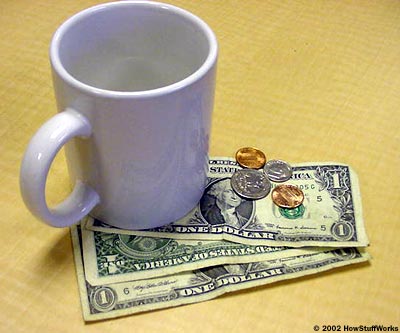 Tip jars are everywhere -- from your local coffee shop to the deli -- blurring the lines of gratuity, making it that much more confusing to know when to reach for your wallet. So how do you know when you should tip and when you shouldn't?

If you've ever worked in the hospitality industry -- waiting tables, tending bar, carrying luggage -- you've probably depended on tips from your customers to make ends meet.

Many people who haven't worked in this industry don't realize that the servers, guides, drivers, concierges and others who help improve our dining and traveling experiences sometimes aren't paid even minimum wage by their employers -- not to mention cost-of-living increases. They depend on the gratuities that their customers give them for good service and friendly help.

Although tipping is a multibillion-dollar industry, it isn't a globally consistent phenomenon. In fact, in some countries, tipping is illegal. In this article, we'll look into the custom of tipping, learn how it began, determine how much we should tip for different services, and examine research that has been done on what makes us tip more (or less) than usual.

A tip, or gratuity, is a small amount of money given voluntarily as a token of appreciation for a service rendered. We tip our servers as a way of thanking them for good service. We might also leave a very low tip, or no tip at all, as a signal that the service was substandard.

But how did tipping get started in the first place? Why don't employers just pay their employees a regular wage and increase their prices to make up the difference? In some places, they do, but many of us -- especially in the United States -- are so accustomed to leaving a tip for good service and uncertain about protocol, that we end up leaving our servers money anyway.

­­There are also several theories about where the word "tip" comes from. One holds that in the 17th century, the word was used as a verb to mean "hand it over" or "to give." This follows suit with the stories of feudal lords throwing gold coins as "tips" to the peasants in the street to ensure their own safe passage [Source:Metroactive].

­Tip is also thought to be an acronym for "to insure promptness," with its origins in 16th-century English coffeehouses. This idea is challenged, however, because some say acronyms weren't widely used until the 1920s. In addition, the more correct version would be "to ensure promptness."

Furthermore, Random House's Word of the Day column disputes the tip-acronym-hypothesis, stating, "Tip was originally thieves' slang -- then called 'cant' -- and meant 'to give; pass along'" [Source: ­Random House].

In the next section, we'll look at the psychology of tipping and tricks of the trade to increase gratuity.

The Psychology of Tipping

The most prominent reason for tipping appears to be more of a guilt issue than a gratitude issue. We know that tipping, at least in the United States, is expected, and if we don't tip, we stand the chance of angering the server, and then who knows what our next visit to that restaurant, airport or salon will be like?

Also, our assumption that tipping is designed to encourage good service for our next visit may or may not be accurate. What if we are at a restaurant that we know we won't be back to? What then is our motivation to tip? Some argue that it is a way of making ourselves feel better about being served because we know the waiter works hard and isn't paid well.

Believe it or not, a lot of research has gone into why we tip and what makes us tip more or less for similar service. Research has shown that the quality of the service we receive isn't always reflected in the tip we leave. Many who have studied the practice have discovered that excellent service only draws a marginally higher tip than average service. Other things the server might do, however, do make more of a difference -- probably without our even realizing it.

Cornell University's Center for Hospitality Research conducted several studies revealing some other interesting facts about server habits that can boost tip percentages. Here are a few of them:

Touching - Waiters experienced a tip increase from 11.8 percent to 14.8 percent of the check total when they briefly touched the shoulder of the customer. Both men and women left higher tips when touched, and although younger customers increased their tip amount more, all ages increased the tip by some amount [Source: Center for Hospitality Research at Cornell].

­Squatting - Two studies showed that waiters who squatted next to the table when taking orders and talking with customers increased their tips from 14.9 percent of the bill to 17.5 percent of the bill in one study, and from 12 percent to 15 percent in another study. Apparently, the eye contact and closer interaction creates a more intimate connection and makes us want to give the server more money [Source: Center for Hospitality Research at Cornell].

Giving candy - A study that involved giving customers a piece of candy with their bill showed an increase in tip percentage from 15.1 percent to 17.8 percent. Another study in which servers gave each customer two pieces of candy with the bill increased the tip from 19 percent to 21.6 percent of the bill. Still another study showed that the way the server gave the customer the candy had the largest impact on the increase of the tip: This study had the server initially give each member of the customer's party one piece of candy and then "spontaneously" offer a second piece of candy. This method increased the tip to 23 percent of the bill [Source: Center for Hospitality Research at Cornell].

Being helpful - A study of hotel bellhops revealed that just taking a few extra minutes explaining to guests how to operate the television and thermostat, opening the drapes for guests, and offering to fill the ice bucket increased tips from $2.40 to $4.77 [Source: Center for Hospitality Research at Cornell].

Next, we'll look at who we're supposed to tip and how much is standard.

Can the Weather Determine Tip Amounts?

Temple University psychologist Bruce Rind found that weather can influence tip amounts. Rind conducted a study in a room with no visual clues to the weather. "When the server told guests that it was raining, tips averaged 19 percent of the bill. But describing sunny skies sent the gratuity rate soaring to 24 percent" [Source: Pyschology Today].

Tip a food delivery person $2 to $5, depending on distance and weather conditions
Courtesy Lisa F. Young/Dreamstime.com

For many people, tipping is a way of ensuring continued good service. For example, if you go to the same hairdresser every month, you probably want to keep him or her happy by tipping well, usually 15 to 20 percent; but what about all of those other services you receive? Do you know how much you should really tip the skycap, the bellman, the concierge, the maid and all of those other helpful folks out there who depend on tips to make a living?

It's extremely confusing, and it varies not only from country to country but from city to city as well. No wonder pocket tipping charts and cell phone tipping calculators come in so handy. Below are some general guidelines for tipping the more common (and a few of the less common) services we receive.

Most of us know that we should tip waitpersons at restaurants 15 to 20 percent of the bill. But what if you bought a $100 bottle of wine? Although there is some debate here, it is often acceptable to tip less than 15 to 20 percent on an expensive bottle (or bottles) of wine that is s­erved with dinner.

At upscale restaurants, you may also need to tip the sommelier or wine steward 10 to 15 percent, taking into consideration that he is sharing his expertise with you, often taking the time to learn about your preferences so that he's able to make appropriate recommendations.

If the maitre d' found an exceptional table for you, then tip up to $20 for that effort, in advance or after you are seated.

It's also important to remember that your waitperson tips all of the other servers who assisted him throughout your meal, such as the busboy, the bartender and others. However, this does not include the coatroom attendant, who typically receives a $1 tip [Source: itipping.com].

Other types of eating or drinking establishments:

What about all of those people who provide services throughout out the year, whom you patronize on a regular basis? How do you tip them? Most people give a gift during the holiday season. Here are tipping suggestions for typical service providers:

Tips are not usually necessary for desk clerks, unless they do something out of the ordinary for you.
Courtesy Steve Mann/Dreamstime.com

Gratuities to hotel staff vary from location to location, usually depending on the size of the metropolitan area and class of hotel. Although hotel personnel and the typical services that they provide are listed below, should any staff member go above and beyond (outside of these guidelines), you should consider compensating them for their efforts.

Next, we'll look at international tipping customs and when you should refrain from tipping. ­­­

Michael Lynn, an associate professor of market and consumer behavior at Center for Hospitality at Cornell University, researched the variations of tipping in different countries. Comparing the types of services that were tipped in each country with personality tests that had been given to people in those countries, he came to the conclusion that countries with more "extroverted" and "neurotic" people gave tips to the greatest number of services and also tipped the largest amounts. (The U.S. was at the top of both of those categories, by the way.)

His theory is that "extroverts are outgoing, dominating, social people" and see tipping as an incentive for the waiter to give them extra attention. Neurotics are more prone to guilt and general anxiety, making them tip more because of their perceived difference in status between themselves and the server [Source: Center for Hospitality Research at Cornell University].

Aside from these facts, other cultures definitely see tipping differently. For example, in many European restaurants, 10 to 15 percent has already been added to the restaurant bill. You can leave extra money or round up to the next currency amount (going from 27 to 30 euros, for example) if the service was especially good, but it isn't usually necessary. In South Africa and Mexico, you'll be expected to tip almost everyone [Source:BBC News]. In Australia, a 10 percent gratuity is usually only added to checks at fine dining establishments, but in New Zealand, tipping is virtually nonexistent in restaurants. And in Vietnam and Argentina, tipping is illegal in restaurants [Source­:­CCRA International].

Each country places a different value on service. Following these few simple rules from the Washington Post should keep you in servers' good graces and prevent any international faux pas:

For more information on tipping and related topics, check out the links on the next page.

Who Are We NOT Supposed to Tip?

There are still a few people out there who we are NOT supposed to tip. Some of these include: