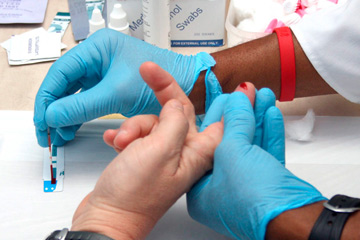 HIV testing can be done orally, or by drawing blood
Gallo Images/Getty Images

President Barack Obama has set three goals related to the AIDS epidemic in the United States. First, he wants to reduce the rates of HIV incidence. Next, he wants to give people who are diagnosed better access to care and better treatment options. Finally, he wants to reduce HIV-related disparities so that some groups aren't more at risk than others.

The Office on National AIDS Policy (ONAP) has been tasked with creating the plan that will achieve these goals. As of June 2010, ONAP is finalizing a National HIV/AIDS Strategy (NHAS) which will serve as a guide for reducing infections and increasing access to care. To create the strategy, ONAP gathered extensive public feedback. As part of its public involvement campaign, the office held community discussions in 14 cities, solicited comments on its Web site and conducted meetings with stakeholders, such as business leaders and HIV-positive people who live in rural areas. In April 2010, ONAP released a report that included all of the recommendations it had heard. Now, the office is working on refining the ideas so it can present the most effective ones to the president.

It's a safe bet that among the ideas included in the NHAS will be several related to HIV testing. Since HIV is transmitted largely by people who don't know they have the disease, increased testing will be important to curbing the infection rate. The White House, in conjunction with local and state health organizations, may look for more ways of removing stigma surrounding HIV testing and the disease itself. Ultimately, however, the responsibility for curbing the spread of HIV rests with the individual. It takes a person's will and determination to request the test. So if you're looking for something to do on June 27, why not participate in National HIV Testing Day? And don't think you're off the hook if you already have plans -- no matter the date, it's a good day to get tested for HIV.

For more information on HIV and AIDS, see the links below.