The AIDS Epidemic and HIV Testing 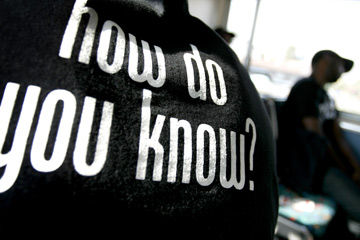 The Black AIDS Institute used the slogan "How Do You Know?" to encourage HIV testing.
Associated Press/Branimir Kvartuc

We've come a long way in our understanding of HIV since June 1981, when doctors saw the first cases of what would come to be known as AIDS. We now know how the disease spreads, and we've made remarkable breakthroughs in treatment options so people who are diagnosed and treated can live longer, healthier lives.

Those advances don't mean the AIDS epidemic is over, though. The Centers for Disease Control and Prevention (CDC) estimates that 1.1 million people in the United States are living with HIV today. Of that 1.1 million, 20 percent don't know that they're infected. One in 5 people are unaware of their status, which highlights just how important events like National HIV Testing Day are. Studies have shown that most people who know they have HIV effectively prevent the spread of the disease to their sexual partners and future children. And not only do they avoid infecting others, they can also obtain the care they need before their disease progresses, which gives them more treatment options and a better prognosis [source: CDC].

The CDC recommends that everyone between the ages of 13 and 64 has an HIV test. The CDC also encourages pregnant women to be tested as part of their prenatal care, since certain medications can lower the chances of passing HIV to the baby. Groups of people who are at high risk for HIV should also be tested on an annual basis. These high-risk groups include:

Since HIV disproportionately affects black people and Latinos, they may choose to undergo more regular testing as well.

Although these are the CDC's recommendations for testing, an HIV test isn't a regular part of a checkup. Patients have to ask for it, and the fear and stigma surrounding HIV may keep them from doing so. Again, though, knowing your status is crucial. If your test is positive, you can start seeing a doctor and receiving treatment. If your test is negative, you can learn about the steps you need to take to stay HIV-negative. These steps include abstaining from sex, using a condom every time you have sex, not using other people's needles and asking potential sexual partners to get tested.

The magnitude of the AIDS epidemic in the U.S. is spurring the White House to take action. Read on to find out about what the Office of National AIDS Policy is doing to address the issue.