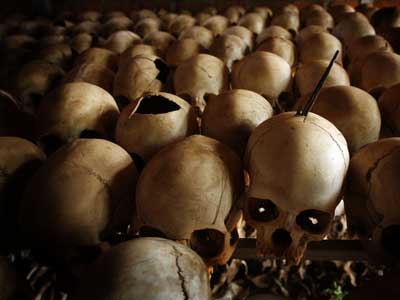 War and civilian atrocities go hand in hand. In 1994, 5,000 ethnic Tutsis fled into this church in Ntarama to escape Hutu militias during the genocide in Rwanda. The militias followed, murdering men, women and children indiscriminately.
Yoray Liberman/Getty Images News/­Getty Images

­Nailing down an exact definition for "terrorism" is tricky business. The Merriam-Webster dictionary defines it as "the systematic use of terror, especially as a means of coercion." Of course, humans can find terror in just about anything -- some people are deathly afraid of birds or even cats. But the most palpable fear is that of death, and the will to avoid it is hardwired into our genes. Terrorism leverages the threat of imminent death to achieve a goal.

Fear of death also plays a major role in warfare. Soldiers throughout history have labored to appear more terrifying -- from dabbing on face paint to draping their horses in the bloody scalps of their adversaries. When two armies meet on the battlefield, the contest ultimately depends on fighting prowess, weapon technology and strategy. But if one army eventually breaks and flees, aren't the soldiers running to escape death? Likewise, if a soldier sticks to the front lines to avoid summary execution for desertion, then aren't his heroics fueled by the same fear?

To avoid such semantic complications, most modern definitions of terrorism emphasize the deliberate targeting of civilians. This is different from the incidental targeting of civilians, such as blowing up a school during the aerial bombardment of a nation's capitol. With terrorism, the school would be the primary target. Yet, even attacks against military targets, such as the 2000 bombing of the USS Cole, have been labeled terrorist acts.

Limiting terrorism to violence against civilians hardly lets professional military off the hook. History is filled with examples of armies deliberately targeting regular people. When armies laid siege to walled cities, they leveled the prospect of starvation and disease against the inhabitants. And when the siege broke, massacre, rape and enslavement often followed -- and the 21st century is hardly free of such atrocities.

­In 2006, the United Nations reported that the systematic rape of civilians was a prominent feature of conflicts in Bosnia-Hergovina, the Democratic Republic of the Congo, East Timor, Haiti and Darfur [source: BBC News]. Darfur, a region of Sudan, has become a prominent modern example of violence against civilians in wartime, with thousands enslaved and hundreds of thousands killed or forced to flee their homes [source: BBC News].

War and violence against civilians are inseparable. To exclude the atrocities committed by soldiers, some politicians and historians limit the definition of terrorism to the actions of groups that aren't officially affiliated with a state. Under this definition, civilian organizations are capable of terrorism, while a police force isn't -- even if both perpetrate the same heinous acts.

­Yet, as we'll learn in the next section, the word "terrorism" has its origins not in the acts of civilians, but in the often bloody relationship between a government and its citizens.

While the exact definition may vary depending on who wields it, some form of terrorism has been employed by nearly every nation. For instance, the United States has financed several so-called terrorist groups, such as the contras in Nicaragua and the mujahedeen in Afghanistan [source: Dershowitz]. Meanwhile, the likes of Gen. Thomas "Stonewall" Jackson and U.S. President Nixon have waged wars that deliberately targeted civilian populations [source: Carr]