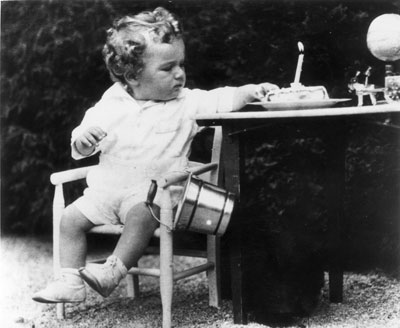 When the infant son of famed aviator Charles Lindbergh was kidnapped from his crib around 9 p.m. on March 3, 1932, people across the nation took notice. A ransom note for $50,000 was left in baby Charles' nursery, and a broken ladder was found outside of the window.

Because of the extensive media attention, Lindbergh allowed a mediator, Dr. John Condon, to negotiate with the kidnapper. After a series of five notes, Condon met with the kidnapper and gave him $50,000 for information. Condon was told that the baby could be found on a boat off the New York harbor. But an extensive search revealed neither the boat nor baby Charles.

Then, on May 12, the baby's body was accidentally discovered in woods near the Lindbergh home. As the search for the kidnapper continued, it focused on tracking any ransom money that had been spent. Investigators traced it to Bruno Richard Hauptmann, who was arrested after authorities found thousands more at his house.

­A jury found Hauptmann guilty on Feb. 13, 1933. In spite of offers to commute his sentence and monetary help for his wife and son, Hauptmann never confessed and was electrocuted on April 3, 1936.