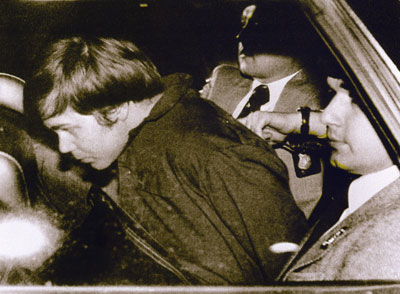 Verdict: Not guilty by reason of insanity

On March 30, 1981, John Hinckley Jr. opened fire on President Ronald Reagan outside of the Park Central Hotel in Washington, D.C. One bullet barely missed the president's heart. Hinckley was wrestled to the ground by Secret Service agents.

But Hinckley wasn't a political vigilante. Rather, he was trying to win the heart of actress Jodie Foster, with whom he'd become obsessed after seeing the 1976 film "Taxi Driver."

After moving to New Haven, Conn., where Foster attended Yale University, leavi­ng multiple letters and speaking with her twice to no avail, Hinckley grew more desperate. Hours before the assassination attempt, he wrote her a note detailing his plot to kill President Reagan to prove himself to her.

Hinckley's defense team set out to prove his insanity, bringing in Hinckley's psychiatrist and other mental health experts to confirm schizophrenia. The prosecution, however, brought in their own experts, testifying that he was sane enough to plan and carry out the detailed plot.

­The jury's verdict of not guilty by reason of insanity enraged many Americans. An often cited ABC News poll taken the day after the verdict was announced revealed that three-quarters of people interviewed disagreed with the jury's decision [source: Finckel]. Hinckley was then transferred to St. Elizabeth's Hospital and in 2003 was allowed to have unsupervised visits with his family.