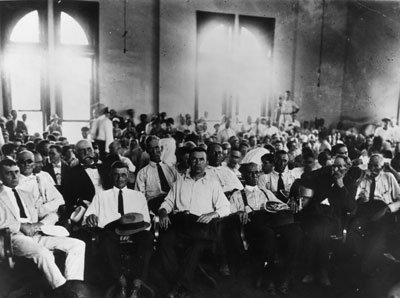 The outcome of the Scopes Monkey Trial resonates in U.S. education even today. In 1925, in Dayton, Tenn., high school teacher John Scopes went to court for teaching the theory of evolution to his students. The state's constitution banned the subject in schools. But Scopes served as more of a pawn; the true purpose of the case was to formally debate the evolution ban in court and to address the controversy surrounding it.

The prosecution team wa­s led by William Jennings Bryan, a former presidential candidate and staunch opponent of evolution. On Scopes' side, Clarence Darrow aimed to prove that the state ban was unconstitutional. Bryan and Darrow attracted crowds of thousands during the hearings. The testimonies and their statements weighed the validity of Darwin's theory versus that of the Bible.

­Ultimately, Darrow, on behalf of the defense, requested that the jury find Scopes guilty so that the case could continue to the state Supreme Court, where the constitutional ban could be possibly overturned. The jury did so, and the Tennessee Supreme Court eventually dismissed the case.