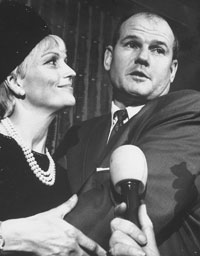 ­Rumored to be the basis of the television show "The Fugitive," Sam Sheppard's trial for the murder of his pregnant wife revolved around an unknown murder weapon and questions abo­ut a possible intruder. Marilyn Sheppard was murdered in her second-floor bedroom early on the morning of July 4, 1954. Sam had reportedly fallen asleep on a daybed on the first floor and was awakened by his wife's scream.

But a shadow of doubt was soon cast over Sam when his account of events seemed somewhat unlikely. He claimed that someone had broken into the house, gone upstairs and attacked Marilyn. He said that he ran upstairs and tried to fight off the "bushy-haired intruder" but was knocked unconscious from behind. After waking up, he ran after the person and tried unsuccessfully to overtake him.

There were no signs of forced entry, and opened drawers and his overturned medical bag seemed too tidy for a random break-in. Also, Sheppard's testimony was given rather stiffly and formally. Evidence of extramarital affairs capped off the prosecution's case.

­The jury found Sheppard guilty of second-degree murder with life imprisonment. But because of how much media attention the case attracted, Sheppard was eventually retried in 1966, where he was acquitted. Interestingly, a civil suit for wrongful imprisonment filed by Sheppard's son and tried in 2000 found Sheppard liable.