Temper Tantrums: When to Seek Help 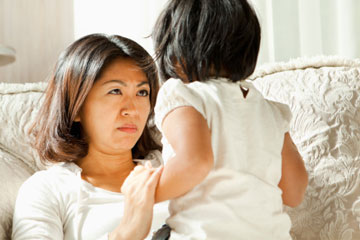 Temper tantrums are a normal part of child development, which generally last from 1 to 3 years old. Child psychologists begin to pay closer attention when the frequency and duration of the fits escalate. Certainly, some boys and girls will have more topsy-turvy weeks than others, but three or more temper tantrums per day that last more than 15 minutes could qualify as disordered behavior [source: Cooke]. The American Academy of Pediatrics (AAP) also advises parents and other adults to watch out for the following red flags [source: Kaneshiro]:

In those situations, the AAP recommends seeking medical help since severe temper tantrums have been linked to psychopathology and antisocial behavior as a child matures. Studies have demonstrated that tantrum habits of children with mood disorders and depression differ from those of their healthy peers as well. For instance, a 2007 comparison of temper tantrums among 279 preschoolers, published in the journal Pediatrics, found healthy kids were much less likely to grow violent, self-injurious, destructive or verbally combative during temper tantrums [source: Belden, Thomson and Luby]. That said, paranoid parents beware: An isolated incidence of violence or aggression shouldn't set off alarm bells. Just because a kid rips the head off a Barbie doll or bites a sibling or a friend during a tirade, that doesn't mean you should immediately head for the doctor's office. It isn't uncommon for typical, healthy kids to tread into maladaptive territory, with about 20 percent of mentally stable preschoolers doing so periodically [source: Belden, Thomson and Luby].

In May 2013, the American Psychiatric Association published the fifth edition of the Diagnostic and Statistical Manual of Mental Disorders (DSM-5), which could exacerbate parental and medical consternation regarding temper tantrums. An addition to the tome called disruptive mood dysregulation disorder essentially classifies temper tantrums in children older than 6 years old as a mental illness [source: Gold]. The newly defined disorder also is considered a clinical distinction from pediatric bipolar disorder, which notably underwent a 40-fold spike in diagnoses from 1995 to 2003 [source: Insel].

Partially due to that rise in pediatric bipolarity, some pediatricians and mental health professionals worry that the new DSM-5 classification may spark a rash of knee-jerk psychiatric labeling and antipsychotic medication prescriptions that could ultimately do more mental health harm than good [source: Else]. Before rushing off to the pharmacy, parents may want to consider a more nuanced approached to addressing persistent temper tantrums and consider whether psychological issues related to children's reactions to stressful pregnancies, separation anxieties, and difficulties with self-regulation and control may be prompting the abnormal outbursts [source: Gold].