Who is the Tea Party? 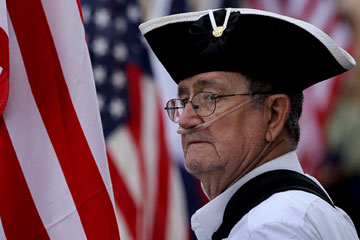 The so-called "Tea Party godmother," Keli Carender who organized the movement's first anti-economic stimulus demonstration in Seattle, Wash., isn't your typical supporter. Carender was 28 years old when she kick-started the wave of protests, which tended to attract older voters fired up against the Obama administration and its economic and healthcare-related policies. In April 2010, CBS News and the New York Times surveyed American adults and self-identified Tea Party backers, and culled the following snapshot of the conservative crusade [source: Montopoli]:

The Tea Party initially centered on an opposition to the federal government interfering in economic matters, preferring the private sector to fend for itself and leave taxpayer dollars alone. The CBS News and the New York Times survey also found a basic distaste for President Barack Obama -- his administration's policies aside -- as the top motivator for Tea Party activism [source: Montopoli]. Broadening the scope of Tea Party members' concerns, a February 2011 poll conducted by the nonpartisan Pew Research Center identified same-sex marriage and abortion as social issues they commonly disapprove of [source: Clement and Green]. And compared to the average voter, Tea Party activists were more likely to cite religion as the determining factor of their political and social ideologies [source: Clement and Green].

Those religious and social influences also set apart the Tea Party from its most similar political counterpart, libertarianism. Whereas the Tea Party and the Republican Party overlap on many fiscal and social issues, both tea partiers and libertarians share a deeper distrust of rank-and-file politicians to accomplish their goals of drastically limiting the reach of government. For that reason, many Tea Party platforms echo the libertarian ethos of eradicating and defunding government programs, and some consider Texas Rep. Ron Paul, the de facto libertarian leader, to be the Tea Party's "intellectual godfather" [source: The New York Times]. But actually, the Tea Party skews more to the right in many ways than libertarianism, and its intensive demands have had notable ripple effects in Washington, D.C.