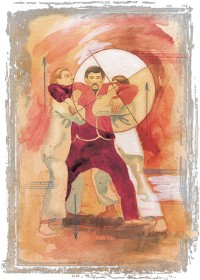 Demonstration of the weight underside feat, a classic example of the power of chi.
©2007 Publications International, Ltd.

If seeing is believing, this one simple but very convincing Taoist "weight underside" feat demonstrates the power and presence of chi. This demonstration of chi does not rely on physical strength, so even those who are relatively small in stature but familiar with the technique can give a very convincing performance.

In the weight underside feat, two strong men stand on either side of the practitioner, each holding one arm, which is bent at the elbow and parallel to the floor. The bend in the arm makes a convenient supporting frame so the men have excellent leverage.

Try as they might, after the initial preparation, the men will not be able to move the master, no matter how much force they use. It quickly becomes a comical sight -- two burly fellows looking desperate and shifting positions in a hopeless effort to move one average-size person from the standing position.

Such a feat of Taoism cannot be accomplished without special knowledge of the chi. The secret is using the mind to direct the chi, which is used to "move" body weight to an imaginary location somewhere beneath the surface of the floor.

As a result, the practitioner becomes virtually immovable. Once the central concepts are learned, masters say the weight underside feat is quite easy to accomplish with regular practice. Using the mind to direct the chi is one of the central ideas in many of the martial arts, and it is particularly important to tai chi chuan. By training the mind in this way, Taoist practitioners can perform many astounding feats.

Weight underside is only one of many applications for chi. Other convincing demonstrations of chi and its powers are related not only to combat but also to the healing arts.

Chi is commonly used in Taoism to relieve pain and stiffness of limbs and joints, to induce sleep, and to promote the healing of damaged organs or other body tissues. Advanced practitioners believe that when the chi circulates freely through the body, it can awaken latent psychic abilities.

Some are able to absorb chi from the world around them and later emit it as a powerful radiation. Demonstrations of chi and its powers are often given at various gatherings in Chinese communities.

Read about the relationship between chi and breathing next, and discover similarities between Taoism and Hinduism.

To learn more about chi and Taoism, see: