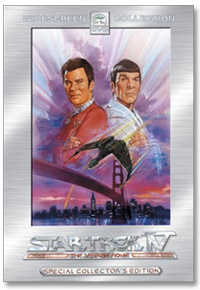 Rather than establishing his place in a group, Spock's swearing in "Star Trek IV: The Voyage Home" humorously demonstrates that he does not belong.

In early childhood, crying is an acceptable way to show emotion and relieve stress and anxiety. As children, (especially boys) grow up, Western society discourages them from crying, particularly in public. People still need an outlet for strong emotions, and that's where swearing often comes in.

A lot of people think of swearing as an instinctive response to something painful and unexpected (like hitting your head on an open cabinet door) or something frustrating and upsetting (like being stuck in traffic on the way to a job interview). This is one of the most common uses for swearing, and many researchers believe that it helps relieve stress and blow off steam, like crying does for small children.

Beyond angry or upset words said in the heat of the moment, swearing does a lot of work in social interactions. In the past, researchers have theorized that men swear to create a masculine identity and women swear to be more like men. More recent studies, however, theorize that women swear in part because they are emulating women they admire [ref].

In addition, the use of particular expletives can:

People also swear because they feel they are expected to or because swearing has become a habit. But just because swearing plays all these roles doesn't mean it's socially acceptable, or even legal. In the next sections, we'll look at social and legal responses to swearing.