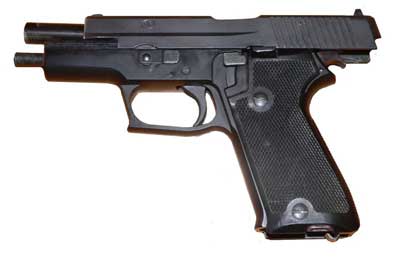 Advanced weapons and equipment are part of what sets a SWAT team apart from regular patrol officers. SWAT officers piece together their body armor from military surplus and items purchased with federal grant money. Sometimes they buy their own.

Wearing body armor is a balancing act between protection, heat and freedom of movement. The torso and head are usually protected using Kevlar panels and a Kevlar helmet. Some SWAT body armor incorporates ceramic armor. For more information about the different types of body armor, check out How Body Armor Works.

Each SWAT officer has a lot of freedom in deciding which weapons he feels most comfortable using. The typical SWAT officer's arsenal includes a reliable, powerful handgun, a sub-machine gun and a shotgun. Officers trained for counter-sniper work will have a long-range rifle. Popular handgun choices include the Sig Sauer P220 and P226, 9mm guns made by Glock, Beretta or Heckler & Koch (particularly guns from the USP series). Many SWAT agents prefer the higher firepower provided by a Colt .45. Handguns are typically worn lower down on the leg than the hip holster common to patrol officers, with a modified holster for fast draws.

Semi-automatic weapons used by SWAT teams are often guns that were confiscated from drug dealers, so there's a lot of variety. Uzis, AK-47s and M-16s are all common, and the H&K MP-5 is another popular choice. All of these weapons can be equipped with silencing devices, allowing officers to take down suspects and maintain stealth if other hostile suspects are nearby.

There are several models of 12-gauge shotgun useful for SWAT purposes. The benefits of a shotgun include extreme stopping power at close range and the ability to hit a target quickly without having to take careful aim. Shotguns can also open doors, and shots bounced off of pavement can flush suspects from hiding places. Models by Remington, Benelli and Mossberg can be found in SWAT units throughout the United States. It is also possible to mount a shotgun under the barrel of a sub-machine gun. The Knight Master Key S and Ciena Ultimate are combination guns of this type.

SWAT teams make frequent use of flash-bang grenades and grenade launchers to incapacitate or scare off rioters. Foam, wood, rubber and bean bag rounds hurt suspects with a reduced chance of doing serious damage, while tear gas and pepper spray can leave someone gasping for air and in serious pain until the effects wear off. For photos and detailed information on these types of weapons, check out How Riot Control Works.

Police snipers are known to prefer bolt-action rifles. Many use hunting rifles modified for police use, while some pay to import European rifles. Laser and optical sights can be used. One restriction: military .50 caliber rifles have limited police use. They are so powerful that a shot can easily go straight through a suspect (or even a wall) and hit a hostage or bystander.

Most SWAT vehicles are scavenged and modified. Repurposed delivery vans, buses or armored cars can be found painted black. Extra armor may be added if the vehicle might be used for tactical purposes, such as driving the team into a dangerous area to begin an assault. Other SWAT vehicles are meant to stay behind the lines, acting as mobile command posts. Large motor homes are popular, though expensive. They have the advantage of providing a working bathroom for the team members to use during lengthy standoffs.

To gather intelligence on a situation, SWAT teams will use many forms of surveillance equipment. High-power binoculars are a basic necessity, and night vision goggles or scopes offer obvious benefits. Thermal imaging and even radar systems allow police to see the locations of people in total darkness, through dense smoke or fog, and sometimes through walls. A variety of tiny cameras and microphones can be used to surreptitiously gather more information about the actions and condition of suspects and hostages.

There's more to being a SWAT team member than weapons and other gear -- tactics play a huge part. We'll look at these next.