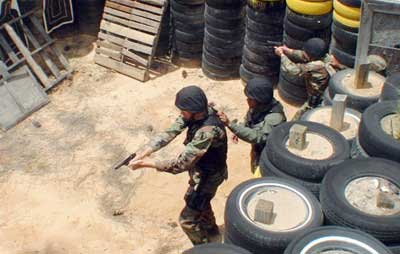 Police forces handle SWAT recruitment in different ways. In most cases, experienced officers volunteer for the job. If they meet the rigorous requirements, they are allowed onto the team. It's sort of like getting into a prestigious college. The desire to be on an elite squad drives these officers to take on the added responsibilities and duties. Other forces treat SWAT duty like another stage in an officer's career. In these departments, every cop eventually goes through two years of SWAT detail, whether they want to or not.

Training for SWAT team members can be grueling. No SWAT unit ever really "finishes" training -- they must maintain constant fitness and the ability to respond to situations automatically. Part-time SWAT units in smaller cities might train only 16 hours per month, while larger, full-time units spend far more time on training.

The regimen begins with physical fitness. Long distance runs, sometimes while wearing heavy body armor, are combined with push-ups, sit-ups, weight training and obstacle course training for agility. Marksmanship is another vital aspect of SWAT training. Most SWAT units require all members to be master marksmen, and many team members are qualified marksmanship trainers. Hitting a stationary target on a range isn't enough. Team members practice firing while on the move, selecting hostile targets from friendly targets, firing into barricaded rooms or vehicles and shooting with a greater degree of accuracy than the average cop. This training includes handguns, long guns and sub-machine guns. Some SWAT units travel to Gunsite, a world-renowned firearms training facility in Arizona.

SWAT teams rely heavily on practice scenarios and simulations. Although they can't replicate exactly what it's like to burst into a booby-trapped drug dealer's apartment or face down a gunman with a hostage, these trial runs are far more effective than simply talking about the situations. Depending on resources, teams may use computerized simulations or full-size mock-ups. Abandoned houses or wooden mazes populated with paper targets, mannequins or even other team members give SWAT agents a chance to try out various scenarios, learn from their mistakes and try again.

Certain members of the team may undergo more specialized training. Advanced training is available for snipers, explosives experts, surveillance experts and hostage negotiators. While most police departments prefer to keep negotiators and SWAT teams separate, the LAPD SWAT team puts every member through negotiator training, and most of the team members are qualified to take on the lead negotiator role. Additional training opportunities are offered by the FBI and some military branches.

The municipal costs of SWAT teams can vary tremendously. In a large urban area, the SWAT team is usually a dedicated, 24/7 unit with as many as 60 officers. Costs for equipment, training and personnel can run to seven figures. Smaller cities can get by with a 10-person team that carries out regular police functions, but can respond as a SWAT team when the need arises. This can cost somewhere around $100,000 per year or more, a significant amount for a small town. Start-up costs can be even greater.

Many municipalities have had success combining their resources with other counties and towns in the region to form a regional SWAT team. Each municipality has a few trained SWAT members and key pieces of equipment, allowing them to form a complete SWAT team when called on. Federal grants, many available through the Department of Homeland Security, can help police agencies pay for SWAT training and equipment.

We'll examine some of the gear used by SWAT team members in the next section.