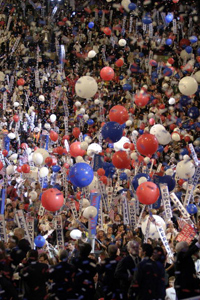 What's the point of having superdelegates in the first place? Explained Willie Brown, former mayor of San Francisco, "You have superdelegates because … You don't want bleed-over from the Green Party, the independents and others in deciding who your nominee will be" [source: CNN]. Brown cited the ability of undeclared or non-Democrat voters in some states to cast a vote in Democratic primaries or caucuses. The logic follows that if enough of these nonaffiliated voters cast ballots, voters outside the Democratic Party could decide the nominee.

Adding superdelegates to the convention provides a countermeasure against such an event. Since superdelegates are all registered Democrats (and usually elected officials), it's reasonable to assume they wouldn't vote contrary to Democratic Party lines. But to some, the power superdelegates have to sway a nomination flies in the face of a democratic process. "If the superdelegates go against the popular will of the voters, whoever emerges as 'victor' will enter the presidential election shorn of democratic legitimacy and devoid of electoral credibility" warned columnist Gary Younge during the 2008 race [source: Guardian].

Superdelegates have one vote for one person; those pledged delegates that are earned through primaries can represent thousands of individuals. This leads to concerns about the disproportionate influence superdelegates wield. While individual voters' votes are ostensibly earned through a candidate's platform and rhetoric, a superdelegate's vote can, according to DNC rules, technically be bought.

Some political observers are concerned over the rules covering the courting of superdelegates. There is little if any protocol that says delegates can't be given outright gifts or even money. By the time the 2008 primary season began, some already had received money in the form of campaign contributions [source: Boston Globe]. "A candidate can feel free to entice a superdelegate with allusion to past and future favors," added one reporter [source: NPR].

Even the delegates won in primaries and caucuses aren't actually bound to vote the way they've pledged to [source: Politico]. Despite the concern superdelegates generated during the 2008 Democratic primaries, they ultimately posed no threat at the national convention. They did, however, boost Sen. Barack Obama into the nomination. While Sen. Hillary Clinton continued winning primaries and caucuses to the end of the season, Obama ultimately accrued more superdelegates, which carried him to the Democratic nomination -- before the convention was held.