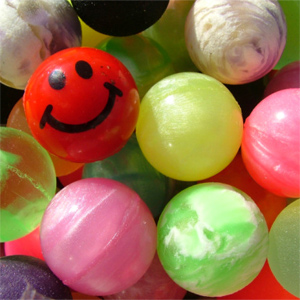 A scientist working for a chemical company is sometimes reluctant to pursue his or her own research interests in a basement laboratory. That's because the employer enjoys the right of first refusal on any employee discovery, even one made by accident at home. Norman Stingley, a chemical engineer working for Bettis Rubber Company, apparently had no reservations about running a few experiments in the off-hours. Working in his spare time in 1965, Stingley took a gooey, rubberlike substance and compressed it under 3,500 pounds of pressure [source: Time Magazine]. The result was a dense, compact synthetic rubber with amazing elastic properties. The material had a tremendous bouncing potential, but it tended to crumble when struck too hard.

The engineer honored his employment contract by offering the invention to Bettis. The rubber company passed on the opportunity, citing concerns over the unstable quality of the compound. Who would want a material, even one with an unbelievable bounce, if it fell apart after a few hours? Bettis told Stingley he was free to take his invention outside the company [source: The Wham-O SuperBall Operator Manual].

Stingley did just that, arriving soon after in the office of Dick Knerr and Arthur "Spud" Melin, owners of Wham-O. Knerr and Melin had a reputation for taking wacky inventions and turning them into sensational toys. When Stingley arrived with his synthetic rubber, the Wham-O wild men had already earned millions of dollars with the Frisbee flying disc and the Hula Hoop. The chemical engineer from Bettis felt sure they would be able to take his big idea and make it even bigger.

Wham-O accepted the challenge and sent Stingley back to the lab to make the bouncy black material more durable. After several weeks of tweaking, testing and refining, he was able to improve the formula enough to satisfy Knerr and Melin. It called for just the right ingredients, as well as the right temperature and pressure. It also required a certain shape -- a sphere of about 2 inches (5.08 centimeters) in diameter -- for the process to work effectively. Stingley called his new material Zectron and filed for a patent in August 1965. Zectron, of course, didn't mean anything, but it sounded scientific and cool -- the perfect word for the post-Sputnik era. Knerr and Melin used the name to full advantage. They marketed Stingley's bouncing ball as the SuperBall, saying it was "made from amazing Zectron!"

The SuperBall was an instant hit across all age groups. Kids bounced the ink-black balls through their neighborhoods, while adults played with them at work when their bosses weren't looking. Between 1965 and 1970, Wham-O sold some 20 million SuperBalls and created a cultural phenomenon that rivaled the Hula Hoop [source: Wham-O]. Then, as quickly as the craze began, it started to ebb. By the 1970s, a number of competitive super-bounce balls flooded the market, and the toy wasn't nearly so special.

Still, anyone who had the Original SuperBall knew there was a difference. Up next, we'll take a look at the characteristics that differentiated the SuperBall from the competition.