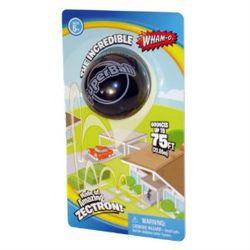 Remember when your mom would accuse you of bouncing off the walls? No ball could bring that sliver of American slang to life like the SuperBall from Wham-O Toys. Invented in the early 1960s, the SuperBall didn't just bounce off walls -- it ricocheted with reckless abandon, making you wonder if the Ping-Pong-sized plaything could somehow defy Newton's laws of motion.

You can still find SuperBalls today (sometimes called Super Balls, too), but you need to be wary of imitations. According to Wham-O, which continues to manufacture and market the big bouncer, no rubber ball can rival a SuperBall. But what exactly differentiates the Original SuperBall from the knockoffs? What process does the company follow to transform an ordinary ball into something extraordinary? And what can you do with a SuperBall that you can't do with, say, a tennis or squash ball?

Those are the questions this article will answer. We'll cover the science of SuperBalls and little of their sociology, too. For example, how did such a simple toy become such a cultural phenomenon? As evidence, consider this passage from an article published in a 1965 issue of Time magazine:

A dark purple sphere about the size of a plum, Super Ball has already bounced into millions of U.S. homes, shows no signs of slowing down. McGeorge Bundy bounces Super Balls in his Washington basement, brokers on the Pacific Coast Stock Exchange throw them about the floor during slack hours, Manhattan executives dribble them on their desks, and kids around the country are bouncing them down sidewalks and school corridors.

Part of the SuperBall's success can be traced back to Sputnik, the small satellite launched by the Soviet Union in 1957. Sputnik ignited the space race, but it also sparked fear among Americans who felt the Soviets were far ahead of U.S. efforts in technical fields. To close the gap, U.S. scientists locked themselves in their laboratories and tried to out-invent and out-discover their communist counterparts.

One of those scientists was Norman Stingley, a chemist working for Bettis Rubber Company in Whittier, Calif. Up next, we'll examine how Stingley's accident led to one of the biggest fads in the history of American toys. 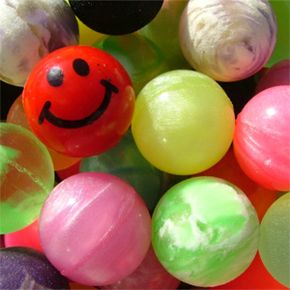 A scientist working for a chemical company is sometimes reluctant to pursue his or her own research interests in a basement laboratory. That's because the employer enjoys the right of first refusal on any employee discovery, even one made by accident at home. Norman Stingley, a chemical engineer working for Bettis Rubber Company, apparently had no reservations about running a few experiments in the off-hours. Working in his spare time in 1965, Stingley took a gooey, rubberlike substance and compressed it under 3,500 pounds of pressure [source: Time Magazine]. The result was a dense, compact synthetic rubber with amazing elastic properties. The material had a tremendous bouncing potential, but it tended to crumble when struck too hard.

The engineer honored his employment contract by offering the invention to Bettis. The rubber company passed on the opportunity, citing concerns over the unstable quality of the compound. Who would want a material, even one with an unbelievable bounce, if it fell apart after a few hours? Bettis told Stingley he was free to take his invention outside the company [source: The Wham-O SuperBall Operator Manual].

Stingley did just that, arriving soon after in the office of Dick Knerr and Arthur "Spud" Melin, owners of Wham-O. Knerr and Melin had a reputation for taking wacky inventions and turning them into sensational toys. When Stingley arrived with his synthetic rubber, the Wham-O wild men had already earned millions of dollars with the Frisbee flying disc and the Hula Hoop. The chemical engineer from Bettis felt sure they would be able to take his big idea and make it even bigger.

Wham-O accepted the challenge and sent Stingley back to the lab to make the bouncy black material more durable. After several weeks of tweaking, testing and refining, he was able to improve the formula enough to satisfy Knerr and Melin. It called for just the right ingredients, as well as the right temperature and pressure. It also required a certain shape -- a sphere of about 2 inches (5.08 centimeters) in diameter -- for the process to work effectively. Stingley called his new material Zectron and filed for a patent in August 1965. Zectron, of course, didn't mean anything, but it sounded scientific and cool -- the perfect word for the post-Sputnik era. Knerr and Melin used the name to full advantage. They marketed Stingley's bouncing ball as the SuperBall, saying it was "made from amazing Zectron!"

The SuperBall was an instant hit across all age groups. Kids bounced the ink-black balls through their neighborhoods, while adults played with them at work when their bosses weren't looking. Between 1965 and 1970, Wham-O sold some 20 million SuperBalls and created a cultural phenomenon that rivaled the Hula Hoop [source: Wham-O]. Then, as quickly as the craze began, it started to ebb. By the 1970s, a number of competitive super-bounce balls flooded the market, and the toy wasn't nearly so special.

Still, anyone who had the Original SuperBall knew there was a difference. Up next, we'll take a look at the characteristics that differentiated the SuperBall from the competition.

A lot of companies tried to capitalize on the SuperBall craze of the late 1960s and early 1970s. They made knockoff super-bouncers that came in a variety of sizes and colors. Most were the size of large marbles and could often be found in bubblegum machines. For a mere quarter, a kid could walk away with a rainbow-colored ball that did indeed leap higher than the average ball.

True devotees of the big bounce, however, would settle for nothing less than the Original SuperBall. Luckily, it was easy to tell the difference between a Wham-O-made product and its imitators. The Original SuperBall was larger for one thing. About the size of plum, it measured 1.875 inches (4.76 centimeters) in diameter. Its color was reminiscent of a plum, as well. It came in midnight black or deep purple, like any self-respecting Space Age toy should. And, of course, it bore the official Wham-O Zectron embossing.

The Original SuperBall sold for 98 cents, but the extra pennies bought a much more energetic bounce. Wham-O claimed that the ball could bounce six times higher than, say, a tennis ball dropped from the same height. Throw it at the ground with some force, and it could leap over a three-story building. Hurl it within a small room, and it would ricochet off the walls numerous times before stopping. The secret of the big bounce could be found in the tightly compacted rubber, which preserved more of the object's elastic energy. As a result, each SuperBall bounce retained about 90 percent of the energy of the preceding bounce.

They weren't indestructible, however. Even with Stingley's revised formulation, the SuperBall was prone to disintegration if thrown at the ground or struck with too much force. But with a little care, the toy could last a long time. In fact, some people still carry their Original SuperBalls, either as a way to relive childhood memories or to pay homage to post-Sputnik science. In the next section, we'll examine some of this science to understand what Zectron is and how it works.

When asked, Wham-O marketers claim that SuperBalls have a resilience of about 90 percent. That means if you drop a SuperBall from 12 inches (30.48 centimeters) onto a hard surface, it will bounce back to about 10.8 inches (27.43 centimeters), then 9.72 inches (24.69 centimeters), then 8.75 inches (22.23 centimeters) and so on. Why doesn't it bounce back to 100 percent of its previous height? Like all elastic materials, SuperBalls easily regain their shape after being distorted. But some of the energy that goes into distorting the ball is lost as heat. In other words, a little bit of energy is lost on each bounce.

Ask any well-stocked lab to give you a small sample of Zectron, and you'd get nothing in return but a blank stare. Possibly a chuckle. That's because it doesn't exist. Norman Stingley coined the term to describe the synthetic rubber he invented on behalf of Wham-O. If you were to identify a real substance behind the Zectron façade, it would be polybutadiene, the main ingredient of a SuperBall. Now you can appreciate why Stingley devised the Zectron moniker. He feared no one would want to buy a ball with "made with amazing polybutadiene" printed on its side.

He might have been right, but the real science behind Zectron is at least a little interesting. Take the name polybutadiene, for instance. It's made up of three distinct parts that provide clues about the material's chemical nature:

Butadiene, then, describes a compound built with a four-carbon chain containing two double bonds. A chemist would write this structure as CH₂=CHCH=CH₂, where the parallel lines indicate the double bonds. The final part of the name -- the prefix "poly-" -- tells you that there are many butadiene molecules strung together to form what chemists call a polymer. The polymerization process begins when an unpaired electron on one butadiene subunit steals an electron from an adjacent butadiene subunit, bonding the two together. This sequence of events occurs repeatedly until a long chain of molecules forms.

By itself, polybutadiene doesn't produce an effective material. It becomes gooey at high temperatures and brittle at low temperatures. To transform it into a resilient, stable rubber, Stingley borrowed a page from the lab manual of Charles Goodyear, who discovered that sulfur added to rubber made it flexible and resilient at any temperature. Goodyear called this vulcanization, and Stingley needed to vulcanize his new material, too. He mixed 100 parts by weight of polybutadiene with 0.5 to 15 parts by weight of sulfur. Then he placed the mixture in a mold and cooked it at 285 to 340 degrees Fahrenheit (140.56 to 171.11 degrees Celsius) while simultaneously compressing it at a pressure of 500 to 3,000 pounds per square inch.

The result was the one, the only, the Original SuperBall -- the amazing toy that still delights anyone interested in bouncing off the wall.

The elastic qualities of polybutadiene give SuperBalls their amazing bounce. But the synthetic rubber has another fun feature -- a high coefficient of friction, which means the material can really grip a smooth surface. This accounts for the unusual spins you get when you launch a SuperBall. For example, the first bounce often causes the ball to acquire topspin, which then causes the ball to surge forward in an unpredictable way. 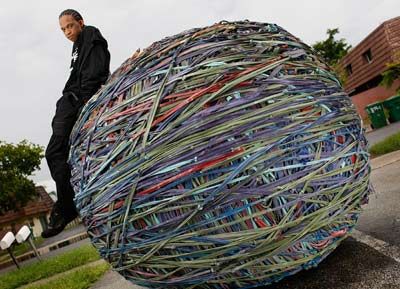 Up Next
How Rubber Works
Explore More 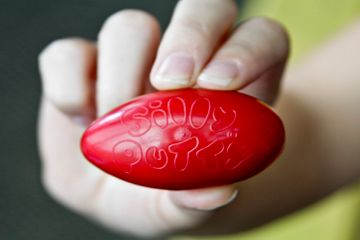 You May Like
How Silly Putty Works
Explore More 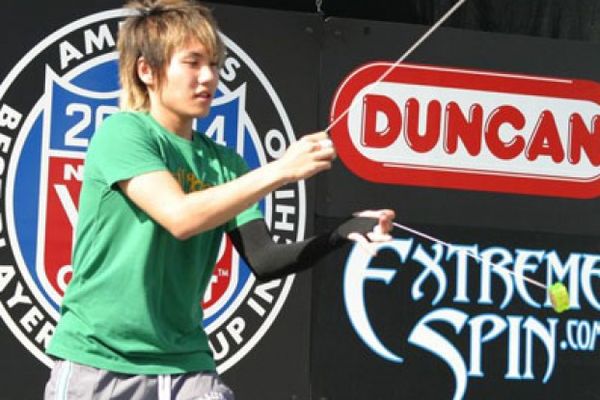