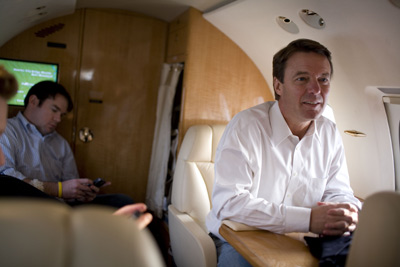 Dem­ocratic hopeful John Edwards aboard his jet during the 2008 primary season. Campaigning for a day like Super Tuesday can really stretch a candidate's budget.
Jonathan Torgovnik/Getty Images

One problem with a group of primaries and caucuses scheduled together on the same day is that it demands a fast pace. Candidates don't have time to get their message out and voters don't have time to hear it. This results in what politicos call tarmac campaigning -- candidates have no time to leave the immediate area of their plane during this rigorous schedule.

Holding lots of contests simultaneously in many states all over the country also means that if you're a candidate with limited funds, it's a good bet you'll be broke before the campaign leading up to Super Tuesday is over. Flying from state to state in a short time really adds up.

Another troubling aspect of Super Tuesday is that it usually determines a party's nominee early in the presidential race. This leaves fewer people feeling as if they have a say in primaries that come later on. With huge amounts of delegates going to one candidate or another in a single day, the delegates from states with later primaries become less important. This is especially true after a Super Tuesday where a clear victor has emerged and has garnered nearly enough delegates to carry his or her party's nomination.

Super Tuesday's problems became even more glaring during the 2008 primaries. In 2004, 10 states held contests on that year's Super Tuesday -- March 2 [source: Washington Post]. In 2008, Republicans and Democrats held contests that collectively spanned 24 of the 50 states, making it the largest Super Tuesday to date. Republican candidate John McCain racked up a big lead in delegates that day while Democratic candidates Hilary Clinton and Barack Obama were almost tied.

Both the Democrats and the Republicans set the first Tuesday in February of the year the national conventions are held as the earliest any state can hold its primary or caucus. In 2008, the Republicans made no exceptions, although the Democrats allowed Iowa, New Hampshire, Nevada and South Carolina to go first. This made states that have traditionally felt left out move their primaries to the earliest date, February 5, resulting in a frontloading of the primary schedule [source: George Washington University].

In 2016, a total of 14 primaries and caucuses will be held on Tuesday March 1, mostly in the South, causing some to dub this the "SEC primary." This is after the college athletic Southeastern Conference in which teams from many of the states represented play. The Southern states banded together in holding their primaries to give their region more clout in selecting the next presidential nominee [source: Reinhard]

For more information on primaries, caucuses and other related topics, visit the next page.