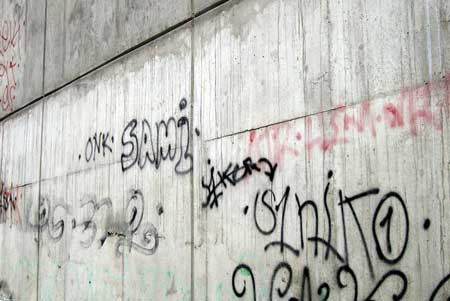 Forming neighborhood groups to clean up graffiti and maintain the area can help to drive out gangs.
Image Courtesy of Stock.xchng

There is no easy way to stop gangs, because the underlying conditions that lead to gangs are complex. Police crackdowns can temporarily lower gang influence in a specific area. However, when poverty and despair remain, gangs will inevitably recruit new gang members to replace those who go to prison [ref].

Extra police enforcement in one area can simply drive the gang activity to another nearby area. As the head of a Buffalo community center said in a Buffalo News article, "The problem we have in this part of the community is that when they shut down a drug house, it just moves down the street."

Furthermore, a police crackdown can help unify what was otherwise a loose, non-cohesive gang. Under outside pressure, the gang members turn to each other, take more pride in their gang affiliation and become capable of greater acts of violence. While police presence is vital in keeping neighborhoods safe, a more successful long-term approach requires multiple tactics that all boil down to one thing: give people something to live for other than a gang. This can include helping at-risk youth or current gang members find decent jobs or obtain an education. Block clubs and community centers bring the non-gang members (the majority of people) together to clean and maintain their streets, get rid of graffiti and otherwise show pride in where they live. Community events such as dances, football games and game nights give youth something to do other than hang out on porches with gang members. If held outdoors, they make those areas less attractive for gang activity because of all the non-gang members around.

The preferred method of gang suppression today is the Department of Justice's "Weed and Seed" program. This combines police enforcement (weeding out the worst gang members) with community activism and economic opportunities (seeding the neighborhood with the means to overcome negative conditions). More than 3,000 Weed and Seed programs are active in the United States. Each site can receive up to $1 million to help fund "law enforcement; community policing; prevention, intervention, and treatment; and neighborhood restoration" [ref].

In the words of former Crip gang member Kody Scott (who had the gang name Monster), "When gang members stop their wars and find that there is no longer a need for their sets to exist, banging will cease. But until then, all attempts by law enforcement to seriously curtail its forward motion will be in vain" [ref].

For lots more information on gangs, gang members and related topics, check out the links below.