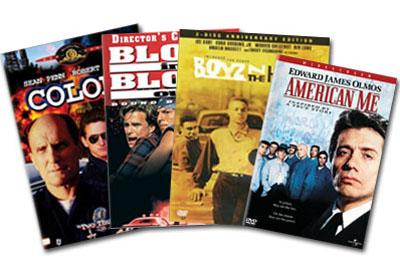 Gang history and gang life have been the subject of several popular films.
Image Courtesy Amazon

Criminal gangs have certainly been around as long as crime itself — it doesn't take a criminal mastermind to realize there is strength in numbers. The urbanization that accompanied the Industrial Revolution gave rise to the modern street gang.

New York City was the epicenter of gang activity in America in the 19th century. Poor sections of the city, such as the Five Points, provided a fertile ground for gangs with strong ethnic identities, usually Irish. Gangs based on Polish, Italian or other ethnicities were also common. The Forty Thieves, Shirt Tails and Plug Uglies fought over territory, robbed and mugged people and sometimes united to fight against gangs from other areas of the city, such as the waterfront and the Bowery district.

Gang activity gradually increased in the 20th century. Through the 1950s and 60s, most gangs were in large cities, although nearby towns and suburbs might have hosted offshoot gangs if they were connected via major highways. Gangs with European ethnicity had all but disappeared, and gangs became almost exclusively black or Hispanic in their membership [ref].

Saniya Shakur, formerly Kody "Monster" Scott, became a member of the Crips at 11 and stayed in the gang for 16 years.
Image courtesy Amazon

In the 1970s and '80s, narcotic drugs became more prevalent on the streets. Firearms also became easier to buy illegally. This combination made joining a street gang both more lucrative and more violent. Overall, gang activity peaked in the mid-1990s [ref].

Some of the most notorious gangs in the United States are the Crips and the Bloods. The Crips began in Los Angeles in the late 60s, partially in response to the activities of other gangs in their East L.A. neighborhood. As the gang grew in power, smaller gangs joined them until Crips-affiliated gangs dominated the city. The Bloods formed in response, as the smaller non-Crip gangs sought their own power base. The Crip-Blood rivalry is vicious and never-ending, but internal strife between different "sets" within each gang has probably resulted in more murders that the feud itself [ref]. Today, both gangs have "franchise" gangs operating out of cities across the country.

The history of the Vice Lords and Gangster Disciples in Chicago follows a similar pattern. Starting out as smaller gangs, each attracted members, established control over large sections of the city and developed a fierce rivalry. The Lords and the Disciples are part of larger gang coalitions known as the People Nation and the Folk Nation, respectively. The influence of both gangs has spread to nearby cities.

Why Do People Leave Gangs?

The brutal truth of gang life is that the only way most gang members leave the gang is in a body bag. Some do manage to move on to a better, peaceful life. It might be because they reach a level of maturity that allows them to see the dangers of gang life in a different light. If they have family or get a good job and a home, they want to protect those things.