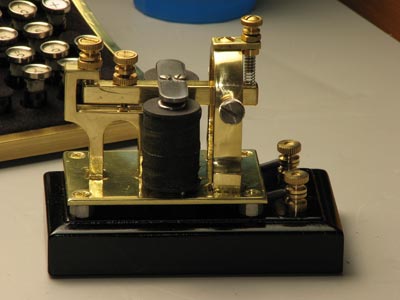 Not all steampunk art relies on modifying existing gadgets. Some steampunk artists create completely original pieces. While most of their work tends to be ornamental, a few inventive gadgeteers have created functional -- if not practical -- devices based on the steampunk style.

Jake von Slatt designed and built a telegraph sounder that accepts data from RSS feeds, converts the information into Morse code and taps out the messages. He first researched telegraph sounders to find out what materials he would need to build his own. After buying aluminum, brass and other supplies, he used various power tools to cut and shape the raw materials. Using some hitch pins, a few washers and some electric wire, he fashioned the electromagnets needed to make the telegraph sounder work. Once he had assembled the telegraph sounder, he connected it to his computer keyboard so that the sounder intercepted the signal sent to his keyboard's LED lights. He used a program called Morse2LED to translate text into Morse code. Normally, the LED lights on his computer keyboard would blink out the encoded messages, but since he had hooked up the telegraph sounder to intercept those signals, it tapped out the messages instead.

Von Slatt's creation is a good example of steampunk. It accomplishes a high-tech task -- transmitting information from RSS feeds -- using antiquated technology. Is it practical? Not unless you're fluent in Morse code. But many people in the steampunk community praised von Slatt's inventiveness.

Other creations have little or no practical purpose beyond establishing a steampunk theme. Some are relatively simple, like a pair of goggles made out of brass and leather. Antique tools and furniture are also commonly used to create a neo-Victorian atmosphere. Many steampunk fans are do-it-yourselfers who tailor their costumes, houses or vehicles to their own tastes.

The art and design of steampunk has its origins in both the history of engineering and in science fiction. Learn more about the fiction that has inspired the work of steampunk artists and inventors in the next section.

Some steampunk artists go to great lengths to explain what their inventions do using archaic terms that could have come from the mouth of a 19th-century engineer. A few will create elaborate stories to explain why the device was created, who invented it and what sort of applications it has -- which might even include manipulating fictional energies or dimensions. Often, the artist will give his or her creation a complex name based upon what it's supposed to do. For example, Richard R. Nagy's desktop computer mod's proper name is "The Nagy Magical-Moving-Type Pixello-Dynamotronic Computational Engine."