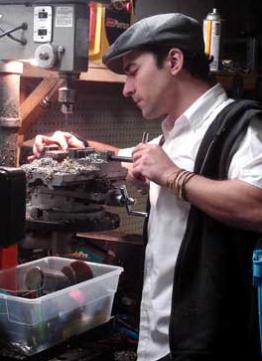 Perhaps the trickiest part of modifying any gadget is changing it without breaking it or making it impossible to use. Ideally, the artist will know how each gadget works before beginning modifications. For most projects, the artist doesn't try to change the performance or function of the original device. Instead, he or she changes the gadget's appearance to look like an invention from the 19th century.

Let's look at modifying a computer keyboard as an example. To turn a modern computer keyboard into a steampunk creation, artists take inspiration from the design of old typewriters like the Underwood 5. Each artist has his or her own process, but in general, a keyboard modification requires these steps.

First, the­ artist purchases old typewriter keys, making sure the back of each key is smooth. If necessary, the artist saws or sands down any excess metal on the back of the keys.

The artist removes the computer keyboard from its plastic frame. Each and every key cap has got to go. The key cap includes the key face (the part of the key you can see) and an under-cap that snaps into the keyboard frame. Steampunk artist Jake von Slatt recommends using an IBM Model M keyboard because the under-caps are flat, which makes it easier to attach the new key faces later.

Next, the artist removes the key face from each key cap, making sure the top of the key cap is a flat surface. The artist then snaps the key cap back into place on the keyboard.

After taking measurements of the keyboard's components, the artist designs the new steampunk frame. The keyboard's layout won't change, but its appearance can undergo a drastic transformation.

The new frame's design includes a faceplate. Most companies design modern keyboards so that the keys are flush against each other. Changing the style of the key faces means that the user will see more of the keyboard's surface. A faceplate masks the plastic parts and circuitry that otherwise would be visible. The artist builds the frame and faceplate using appropriate materials like copper, steel, wood or brass.

­­Once the faceplate is in place, the artist can glue the old typewriter keys onto the appropriate key cap. Artists usually must create customized key faces for certain keys that have no typewriter analogue.

Last, the artist assembles the frame around the keyboard. After many hours of meticulous work, he or she has created a new steampunk keyboard, just like the Victorians never had.

Of course, keyboards are just one example of gadget modification. Other devices might have more or fewer steps, but the principle is the same: Change the object's outward appearance so it looks like it could exist in a steampunk universe. Artists have created steampunk computer monitors, computer mice, electric guitars, mp3 players and watches.

­On the next page, we'll look at some unique works of steampunk art.

How much for that keyboard?

Richard "Datamancer" Nagy charges between $800 and $1,000 for his keyboards. He determines the price based upon the materials his clients want (brushed aluminum is less expensive than antiqued copper, for example) and the amount of time it takes to produce a finished piece. Nagy estimates that each keyboard takes a couple of months to build from start to finish [source: Richard Nagy].