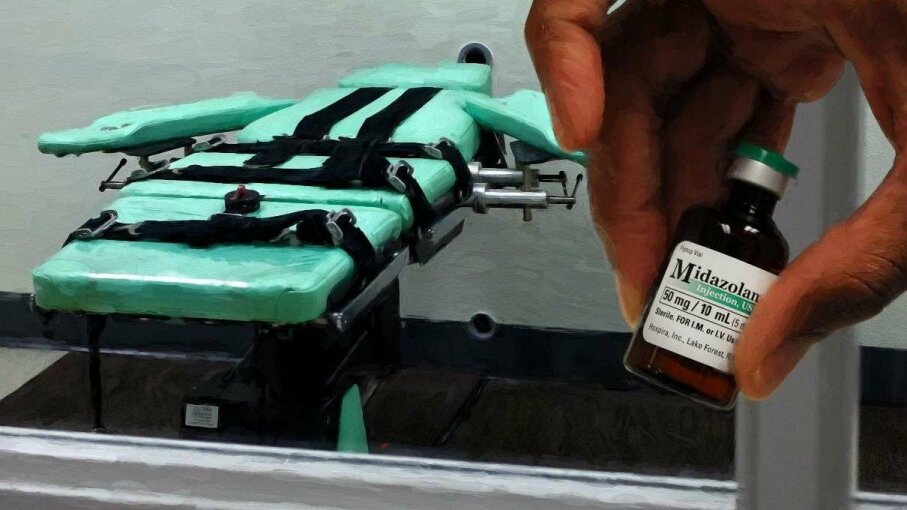 Midazolam was used in two botched executions in 2014. With many of the usual lethal injection drugs now unavailable for executions, some states have been improvising with other drugs. Michael Macor/San Francisco Chronicle/Tracy A. Woodward/The Washington Post via Getty Images/HowStuffWorks

By all indications, the 2014 execution of convicted murderer Dennis McGuire by lethal injection went horribly wrong. Instead of losing consciousness and succumbing immediately to a heart-stopping drug cocktail, McGuire choked and gasped and clenched his fists for an agonizing 10 minutes before his death in an Ohio penitentiary.

Later that same year, Clayton Lockett met a similarly gruesome end in Oklahoma. Lockett, convicted in 2000 of a brutal sexual assault and murder, regained consciousness 13 minutes into his execution and began rolling, clenching his teeth and crying out to his executioners. Officials halted the execution before Lockett died of a heart attack an hour later.

Both of these botched executions employed a drug called midazolam, a sedative that's supposed to quickly render a condemned prisoner unconscious before being administered the drugs that ultimately paralyze the body and stop the heart. In 2015, death-row inmates took a case all the way to Supreme Court arguing that midazolam was unreliable and its use in lethal injection amounted to a violation of their Eighth Amendment protection against "cruel and unusual punishment." The Court shot down the inmates' case in a 5-4 decision.

At the heart of the case — and the source of genuine debate over the fate of capital punishment in America — is a severe shortage of effective lethal injection drugs. Midazolam was only used in Ohio and Oklahoma because the states couldn't get their hands on more potent and proven sedatives like sodium thiopental or pentobarbital.

Why is there such a serious shortage of lethal injection drugs, and where do these drugs come from? For those answers, we reached out to Megan McCracken, a lawyer and lethal injection expert with the Death Penalty Clinic at the University of California Berkeley School of Law.

McCracken explains that there's a shortage of lethal injection drugs mainly because drugmakers in the U.S. and Europe either no longer produce the approved drugs or refuse to sell them to executioners. In 2011, Hospira, the last U.S. manufacturer of sodium thiopental — the original sedative approved for lethal injection — announced it would no longer produce it. And that same year, the European Union — long committed to eradicating capital punishment — issued a ban on all European exports of drugs to be used in executions.

This ban set states scrambling for a replacement, which they thought they found in pentobarbital, another powerful sedative. But then Akorn, the only U.S. producer of pentobarbital, announced that it would no longer allow its medical products to be used in executions.

With no U.S. or European drugmakers willing to sell Food and Drug Administration-approved sedatives for executions, several states — including Oklahoma, Ohio, Mississippi and Nebraska — have postponed all executions until a reliable supply can be found.

Other states are more persistent. In Texas, Georgia and Pennsylvania, officials have turned to private compounding pharmacies to mix up batches of midazolam, pentobarbital and other lethal injection drugs. Compounding pharmacies are not regulated by the FDA and made headlines in 2014 for a meningitis outbreak that killed 64 people.

Unable to get its hands on the usual three-drug cocktail (usually an anesthetic like sodium thiopental or pentobarbital, a paralyzer like pancuronium bromide and a drug like potassium chloride which stops the heart), Texas has switched to a single injection of pentobarbital for its executions, as has Georgia. (So far, 12 executions have been carried out this year, 10 in those two states alone.) Pentobarbital is often used to euthanize animals and in some physician-assisted suicides.

Opponents of capital punishment object to these largely improvised systems of lethal injections, including the experimental two-drug cocktail of midazolam and hydromorphone used in the disastrous execution of Dennis McGuire in Ohio. In response, several states have passed laws protecting the identities of private compounding pharmacies and blocking access to execution procedures by permanently sealing execution records from the media and the courts.

For a legal expert like McCracken of Berkeley's law school, these secrecy laws are a huge obstacle to death-row inmates trying to make the argument that a shortage of lethal injection drugs has led to practices and procedures that amount to cruel and unusual punishment.

"If states are allowed to refuse to disclose information about where they are getting the drugs and who made them," says McCracken, "then the courts can't analyze lethal injection procedures to make a fact-based determination about their lawfulness and constitutionality."

Now That's Something
Since 1976, 1,434 men and women have been executed by lethal injection in the U.S.. Since 1973, DNA evidence and other new information has exonerated 156 death-row prisoners.