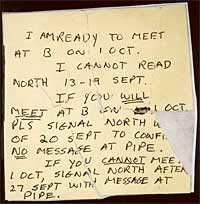 A hidden letter that Aldrich Ames left at a dead drop for his KGB contact
Photo courtesy U.S. Department of Justice

­When secret information is passed to the spy's controllers, it must be hidden so that the enemy doesn't suspect anything. This could ruin the spy's cover, or lead the enemy to deliberately supply misinformation. Until the early 20th century, spies resorted to invisible inks to hide messages between the lines or on the bac­k of non-suspicious correspondence. Sugar solutions or lemon juice are invisible until heated. Other chemicals don't appear until the paper is painted with a specific reagent.

One time-tested method for relaying information is the dead drop. A dead drop is a secret hiding place somewhere in public. It could be behind a loose brick in a wall at the city park, or in a plant at a certain street corner. When a spy has a message to send, he goes about his business, perhaps picking up some dry cleaning or seeing a movie. He passes by the dead drop and deposits the message casually, without arousing suspicion. The spy then has to leave a signal to let his handlers know there is a message to be retrieved. A chalk mark on a lamppost, a certain color of sheet on a clothes lines or even a cryptic message in the classified section of a newspaper are all possible signals. A spy may use several dead drops so he isn't noticed repeatedly visiting the same loose brick.

Spy controllers can use one-way communication t­o issue instructions to spies. The mysterious numbers stations in operation around the world are almost certainly used for this purpose. A numbers station is a government operated radio station broadcasting intermittently on the short-band frequencies. A certain song or announcement will mark the beginning and end of each broadcast, which consists solely of a voice, possibly altered electronically, reciting a long series of numbers. The numbers are coded messages deciphered by the intended recipient using a virtually unbreakable cipher known as a one-time pad.

A great deal of espionage revolves around secret codes. Information transmitted between spies and controllers is usually coded, and a large proportion of government and military communications are encoded, particularly during wars. Many spy missions have the sole purpose of acquiring the keys needed to solve these codes, or obtaining the devices used to encode and decode messages.

U-2 Spy Plane Goes Down

In 1960, U.S. President Eisenhower authorized the flight of a U-2 spy plane directly over the Soviet Union. The plane was shot down by a Soviet missile. The pilot, Francis Gary Powers, parachuted to safety. The Russians recovered Powers and the pieces of his plane, giving them evidence that it was a spy flight. At first, Eisenhower claimed it was a weather research mission gone astray. But when Soviet leader Nikita Khrushchev revealed Powers' capture and the cameras recovered from the plane, the United States was forced to admit they had been spying.