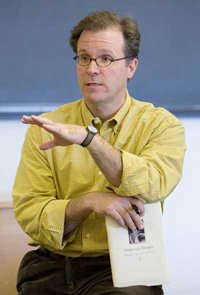 A good way to understand how Spanglish evolved and continues to grow is to look at a similar linguistic hybrid -- Yiddish. Yiddish uses Hebrew characters and its own grammatical structure, but much of its vocabulary has German roots. It got its start in the 13th century as a German dialect spoken mostly by Jews. Other languages, like Hebrew and Slavic languages, have influenced it over hundreds of years. Yiddish has also influenced English. The words kvetch, nosh, mishmash, spiel and chutzpah all come from Yiddish, although some have different spellings or connotations.

Like Spanglish, Yiddish started as a dialect spoken by people who had migrated away from their homes. It became a written language in the 16th century. By the middle of the 20th century and the Holocaust, it had become a full language with its own works of literature. In 1978, Isaac Bashevis Singer even won the Nobel Prize in Literature for his writing in Yiddish [Source: NobelPrize.org].

Yiddish also developed several regional dialects, much the way the styles of Spanglish vary from region to region. "Yiddish itself is a hybrid language, a minority language, an ethnic language spoken by Eastern European Jews," says Stavans:

But Yiddish was never a unified, monolithic way of communication. There was a Yiddish spoken by Polish Jews, and within Poland, different types of accents, different types of cadences…in the Ukraine another type of Yiddish. [Another type] is the Yiddish that immigrants ended up using when arriving to the new world. When those immigrants came to the United States at the end of the 19th century, and up until just the beginning of the second World War...whatever kind of Yiddish they were using got mixed with English, and there was something that emerged that I've called Yinglish, that is a mixing of Yiddish and English, that is very similar to Spanglish, or could be very similar to Franglais, the mixing of French and English, or the mixing of Portuguese and English, whatever language immigrants use when they come to this country. I would say that Yiddish, because of its behavior, its patterns, it allows us to see and understand a lot of how hybrid languages end up shaping up.

In addition to their similarities, Spanglish and Yiddish have several differences. Spanglish is newer than Yiddish, and is still predominately a spoken form of slang rather than a written language. "It's not quite what the Jews were doing with Yiddish in the early half of the 20th century, obviously, because by then Yiddish was a fully developed literary language, and we are just a bit on the outskirts of that process," says Stavans:

There are novels being published in Spanglish, collections of poems, plays in Spanglish today, operas, but we're kind of at the beginning of that process. And that is an interesting and crucial moment, because I think what we're witnessing is a transition between…a predominantly oral language or form of communication, because when I say "language" people say, "But it's not fully formed." And my whole point here is that it's not fully formed but it's in the process of formation…. By moving from the oral to the written, we are inevitably having to come up with a grammar and a syntax and ways of spelling, that is a lexicon and so on. And then who knows what's going to happen in the future, maybe in 200, 300 years it will have become by then a…full-fledged language with its own academy and with a masterpiece written in it that will have to be translated into other languages…. Or maybe it will not stand the test of time. It's hard to say, but what's clear is that today it's quite a force, not only in American society but in the whole hemisphere.

Although Spanglish has not become a fully developed written language, it does appear on television and in print media. In the United States, two 24-hour television networks, Univision and Telemundo, broadcast Spanish-language programs, some of which incorporate Spanglish. Numerous radio stations, magazines and newspapers also provide information and programming in Spanish. All of these sources have the potential to incorporate both Spanish and Spanglish. "I think all that put together makes Spanglish and Spanish in the United States a much more enduring -- and for some a threatening -- verbal presence that can be very politically charged," says Stavans.

Political and social controversy surrounding Spanglish comes from both the Spanish-speaking and English-speaking communities. "In the Spanish-language community, Spanglish is perceived as a lower-class manifestation, a sign of a lack of culture, a lack of refinement, and so on," explains Stavans. "The upper class Latino population that is fully bilingual or speaks only English thinks that if you are using Spanglish, your thoughts are convoluted in that you come from the margins of society or the lower class." This is another similarity with Yiddish, which was once viewed as a language for women and children.

English-speaking communities, on the other hand, often view Spanglish as either a positive or a negative part of Hispanic culture. "The Anglo community sees this in a number of ways, depending on the perspective of the individual," says Stavans. "Politically, some people might see it as a legitimate, authentic way of ethnic communication, but others...on the political right see this as a sign that Latinos are not assimilating, are not becoming full-fledged members of American society and following the path of previous immigrant groups."

This controversy hasn't kept Spanglish from spreading. "Because of what's happening of late, that is that the media is using a lot of Spanglish, there are movies in Spanglish all the time nowadays, some Hollywood blockbusters that include a sentence here and there, or independent films or even some Hollywood movies that are including topics about it, on Spanglish, that are much more forceful and present," says Stavans. He continues:

There's a lot of Spanglish on Comedy Central, there's a lot of Spanglish on the Cartoon Network and on WB for the little kids, and in Latin music, of course, is probably the main instruments of the dissemination of Spanglish, most groups today switch back and forth in the same song, from Spanish to English and then coin new terms. And then the Internet, too, there is something called Cyber-Spanglish that is the language of technology and the Internet that is really used all the time. So I would say that is a slang, but it is very active and very prolific and very fertile in a number of different ways.

Because of its prevalence, Spanglish may be the next major influence on the English and Spanish languages. We'll look at how other languages have influenced them over the last several centuries in the next section.

Studying Spanglish Because of Yiddish

Stavans decided to study Spanglish in part because of his background in Yiddish:

I grew up in...Mexico City, in a Jewish household, a small minority, the Jewish one, that has been there for maybe 100 years, a little bit more. And our primary language of education and one of the languages of domestic or private communication...was Yiddish...Eventually I also learned Spanish, and when I moved to the United States, I thought that I would move into English. But my life in New York City quickly reminded me of the Yiddish of my past, and in particular the language that was being spoken by Latinos at that time. It struck me that Spanglish was a form of Yiddish, a mixing of different types of sources and roots....So I think that my Jewish and Yiddish background, and then the fact that I came to the United States as an immigrant from the South, all were conflated into this curiosity to try to understand, what is Spanglish? Why is it looked down [on] so often by the educated in this country, and what [is] its future?