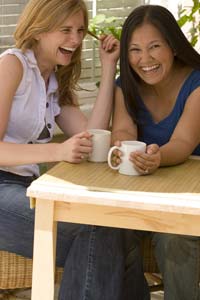 If a potential new member accepts a sorority bid, she becomes a new member, more commonly known as a pledge. Because of negative associations with words like "pledge," many sororities have chosen to adopt new language. At present, NPC-affiliated sororities usually refer to the pledging process as new member education.

During the new member education process, pledges learn more about the organization. For example, a new member might learn the history of the sorority and its values. She'll meet the other new members and spend time bonding with current members. There might be mandated study times, weekly meetings and optional social events. New members must also spend some additional study time getting ready for a sort of entrance exam, which each pledge must pass in order to join the sorority. The test might have information about the organization's history, symbols or founding members as well as general information about the Greek system -- pretty much whatever a pledge has learned during the pledging process is fair game. Rushees should understand that pledging involves a hefty time commitment.

The pledging process is somewhat different for traditionally black sororities. Along with the incredible time investment dedicated to studying, meetings and social events and learning the sorority's history and ideals, many pledges must also learn how to step. The pledge class practices together to perform a stepping routine during a campus step show. Stepping is a dance that involves using the body as percussive instruments -- steppers stomp, clap their hands together and against their bodies to make a rhythm for sorority chants and songs. Routines are highly choreographed and often rely on a call-and-response technique. [Source: California Academy of Sciences]. Stepping began with black fraternities in much the same way the white fraternities' tradition of glee club-style singing sprang to life. Black sororities took up the tradition some time later. Some Latina sororities step as well. The first step show of an initiated member is called a probate show.