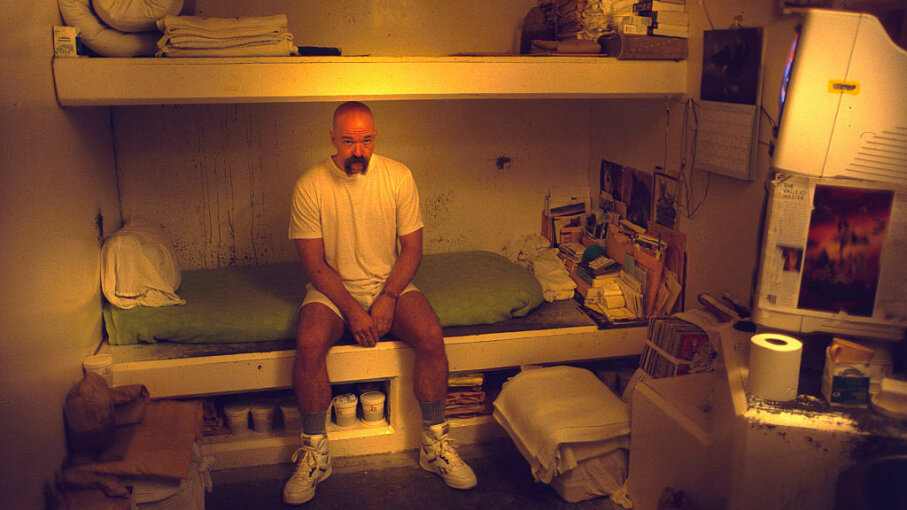 For nearly 45 years, Albert Woodfox lived alone. From 1972 to 2016, he was confined to a cramped jail cell in the Louisiana State Penitentiary (the maximum security prison also known as Angola), with virtually no contact with other human beings. Woodfox was held in solitary confinement for more than four decades — likely longer than any other prisoner in American history — locked up for 23 hours a day, with one hour for exercise and showering, also taken alone. He ended up in solitary because he and another inmate allegedly killed a prison guard; yet no forensic evidence linked either man to the crime scene, and the duo's main accuser fingered them only after he himself was threatened with solitary confinement [source: Cole].

Woodfox was eventually released from prison in 2016, after two mistrials, still declaring he was innocent. And experts are calling his decades in solitary confinement akin to torture. Those so incarcerated often suffer from deteriorating mental health, and find it difficult to re-engage with people once they're released. Some physically harm themselves, even committing suicide [source: The Guardian].

Solitary confinement, also known as "segregation," "restrictive housing," "lockdown" and "isolation," entails keeping a person locked up for 22 to 24 hours a day without human contact. Prisoners are typically placed in tiny cells measuring around 80 square feet (7.4 square meters), which is smaller than a horse stable. The cells generally contain a bed, sink and toilet, with meals delivered through a slot in the door. Overhead light may be kept on in the cell at all times. Inmates are released from their cells for an hour each day to exercise, although they're often transferred to a cage or walled area to do so and may be kept restrained.

Sometimes prisoners shower in their cells; other times they're escorted to and from the shower, typically in shackles. It's not uncommon for prisoners to be prohibited access to almost anything entertaining or diversionary: no books, art supplies, televisions or radios. [sources: Breslow, The Guardian].

Perhaps most egregious, people around the globe are often shoved into solitary confinement for reasons that have nothing to do with bad behavior. Many are put in such quarters during pre-trial investigations. Others are housed there because regular cells are full. Kids, minorities or those who are gay or transgender may be placed in solitary confinement for protection from other inmates, even if they prefer to be in a traditional cell. Some are sent there for minor prison infractions, such as swearing or ignoring orders. The mentally ill are also often locked in isolation [sources: Penal Reform, The Guardian].

Compared to other developed nations, the U.S. has a very high number of prisoners in solitary confinement — as many as 100,000. The decision to put an inmate in such quarters is typically done administratively. That is, the courts aren't involved; prison officials call all the shots with essentially no outside oversight. And prisoners generally aren't allowed to seek legal assistance to avoid going there or to get out [sources: Manson, The Guardian, Solitary Watch]. 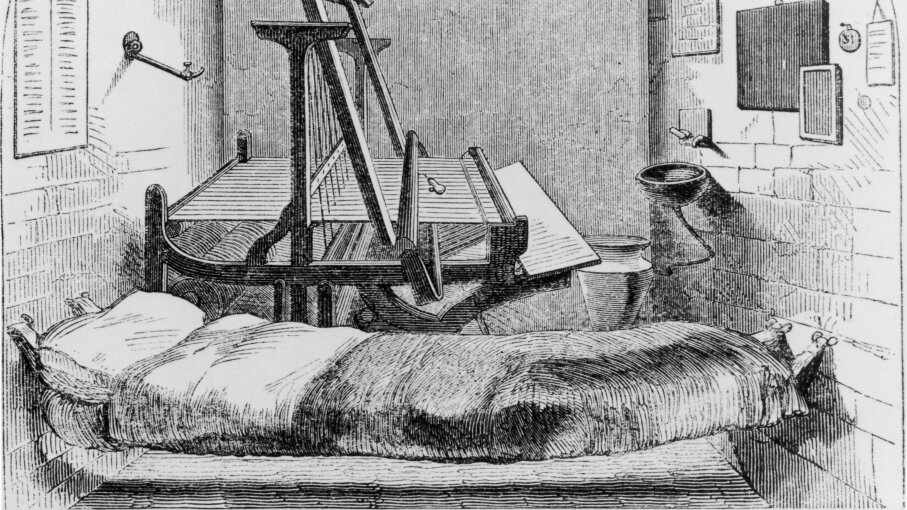 An early example of solitary confinement: a single cell, furnished with a suspended bed and a loom for day work, in Pentonville Prison, London, 1850. Hulton Archive/Getty Images

The practice of isolating prisoners began in America in the late 18th century, when Quakers advocated it as a means of sparing inmates from the whippings and public humiliation common back then. In 1829, Pennsylvania's Eastern State Penitentiary began experimenting with lockdowns, but found inmates committed suicide or became socially dysfunctional, and so eventually abandoned the practice. But a century later, in 1934, solitary was tried again at Alcatraz, where the most problematic prisoners were isolated in D Block.

Still, the practice remained rare until 1983, when two corrections officers were killed by inmates on the same day, in separate incidents, at Illinois' Marion Federal Prison. After the killings, all of the facility's prisoners were put into lockdown — and kept there, even after things had quieted down. Marion thus became America's first "supermax" prison, where all inmates were kept in their cells 23 hours per day [sources: Infographic World[url='http://www.pbs.org/wgbh/frontline/article/what-does-solitary-confinement-do-to-your-mind/'], The Guardian].

Soon supermax facilities, or control-unit prisons, were being built across the nation. In 1994, then-President Bill Clinton signed a crime bill that offered federal monies to states that increased prison sentences. The effect? Even more states constructed supermax prisons or added solitary confinement units, and the number of prisoners so confined skyrocketed.

While the exact number of inmates held in solitary confinement today is difficult to ascertain, experts say around 80,000 to 100,000 American prisoners are locked up in some form of restrictive house. This estimate doesn't include those in juvenile facilities, local jails or immigrant detention centers [sources: Infographic World, The Guardian, Solitary Watch].

What Are the Arguments For and Against Solitary Confinement? 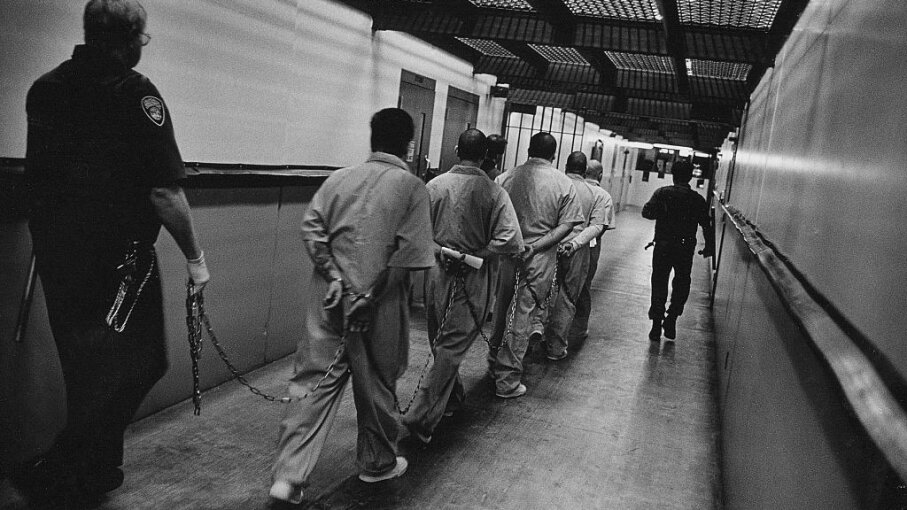 Prisoners are escorted down a hallway in Pelican Bay prison. A study on Pelican Bay found solitary confinement caused a host of psychiatric problems like hallucinations, panic attacks, paranoia, as well as high rates of suicide. Andrew Lichtenstein/Corbis via Getty Images

There are various pros and cons to using solitary confinement. Those in favor of the practice mainly cite its importance regarding the protection and safety of inmates, prison staff and the general public. An inmate who is a child molester, or who has killed gang members, may be at high risk of being injured or killed by fellow prisoners; being placed in segregation can provide him protection. Or a prisoner who has attacked her fellow inmates and staff may be placed in lockdown to protect these people.

Solitary confinement also presumably makes it more difficult for a prisoner to escape, providing an added layer of security for the public from high-risk offenders. Additionally, some proponents argue prison staff needs the disciplinary option of solitary confinement to aid with unruly inmates. And others note sometimes it's simply necessary to manage cell space [sources: Connect Us, Manson].

Placing someone in isolation isn't necessarily a terrible practice, experts say. But it must be employed sparingly and only for very short periods of time. The United Nations, for one, says no one should be held in segregation for more than 15 days.

A study on prisoners held in solitary confinement at Pelican Bay prison in California found that people held in lockdown for long periods of time often suffer from a myriad of mental health issues, including depression, apathy, hallucinations, panic attacks, paranoia and hypersensitivity to external stimuli. They also may develop difficulties with thinking, concentration and memory; become angry and violent; have trouble sleeping or have nightmares; and suffer from dizziness, heart palpitations and perspiring hands. These symptoms may remain long after the person is released or put back in the general prison population [sources: Moore, Breslow, The Guardian, Penal Reform].

Numerous studies show that prisoners held in solitary confinement have higher rates of self-mutilation and suicide than those in traditional cells. In a 1999 to 2004 study of California's prison system, for example, nearly half of all inmate suicides were committed by those in segregation. And an analysis of nearly 250,000 New York City prisoner medical records from 2010 to 2013 showed 53.3 percent of inmates held in lockdown committed acts of self-harm and 45 percent committed acts of potentially fatal self-harm, even though this group comprised only 7.3 percent of admissions [sources: Breslow, Kaba, et al].

In addition to the psychological toll on prisoners, there's also a financial toll on taxpayers. In the federal system, it costs $78,000 per year to house one inmate in solitary confinement versus about $58,000 for a regular prisoner [sources: Johnson and Chappell, Infographic World]. 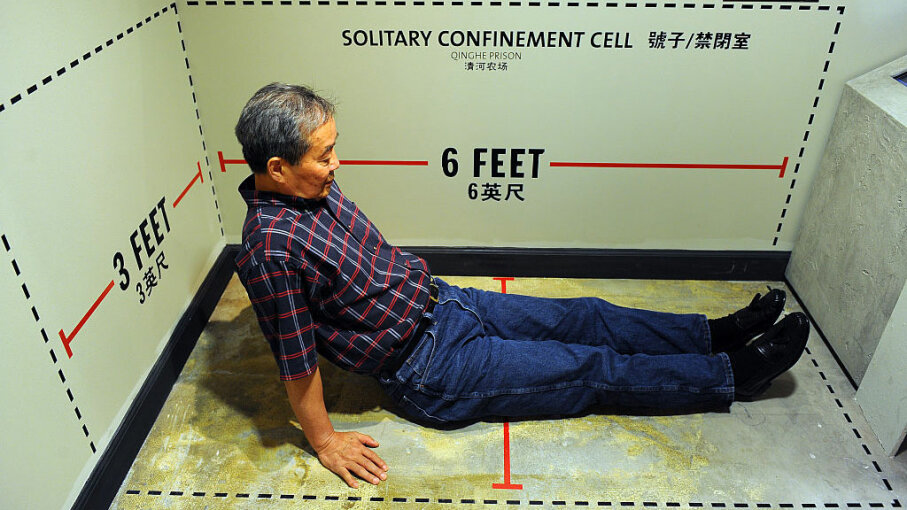 Harry Wu sits in an exhibit showing the exact dimensions of his solitary confinement cell in China, on display at Laogai Museum in Washington, D.C. Wu, who was a human rights activist, spent 19 years in labor prison camps in China. Ricky Carioti/The Washington Post via Getty Images

Throughout much of history, solitary confinement was employed sparingly and for short periods of time. Today, however, inmates often languish in lockdown for years. And it's not just in the U.S. Many countries around the world toss those serving life sentences or on death row into restrictive housing, for example, where they may remain for decades. The practice is also often used excessively. Research from the Vera Institute of Justice found 85 percent of prisoners in solitary confinement in Illinois were there for incredibly minor rule infractions, such as abusive language [sources: Penal Reform, Solitary Watch].

But change is on the horizon. More people and groups are clamoring to end or severely limit the practice. Juan E. Méndez, UN Special Rapporteur on Torture, presented a report to the UN's General Assembly in 2016 detailing solitary confinement practices around the world. The report noted a general trend toward reform.

In January 2016, then-President Obama announced the adoption of various recommendations by the U.S. Department of Justice to limit the use of solitary confinement in federal prisons, including ending such restrictive housing for kids, and allowing those in solitary to spend more hours outside of their cells [source: Ordway and Wihbey]. Some states and cities have also made changes. For instance, New York City has now banned solitary confinement for inmates under 21, or those who are physically or mentally disabled.

In England (as in many other European countries), solitary confinement is rarely used. Starting in the 1980s, British authorities determined that giving their most dangerous prisoners more control, rather than less, would avoid turning every encounter into a test of wills, which would lead to violence. So, prisoners were housed in stable units of 10 people rather than in individual cells and could they earn privileges such as more phone time and contact visits by good behavior. "The results have been impressive. The use of long-term isolation in England is now negligible," wrote Atul Gawande in a 2009 New Yorker article.

As to whether the U.S. will adopt similar strategies remains to be seen. At the Louisiana State Penitentiary — the one that held Albert Woodfox in solitary for more than four decades — George Gibson is living a similar fate. Gibson has been in lockdown since 1982, when as a teen he was part of an escape and abduction attempt with an older inmate. There are no plans for his release [sources: Solitary Watch, Cole].

Solitary confinement sounds tortuous to me. And I cannot fathom having to endure it for weeks, let alone years. Although I consider myself someone who is pretty strong mentally, I don't think I would make it. Plenty of research shows the practice is extremely harmful to inmates, plus costly to taxpayers, so it seems a no-brainer to severely restrict its use. Of course, that's just my opinion. And as we know from our country's recent presidential election, the country is full of people with very divergent views.