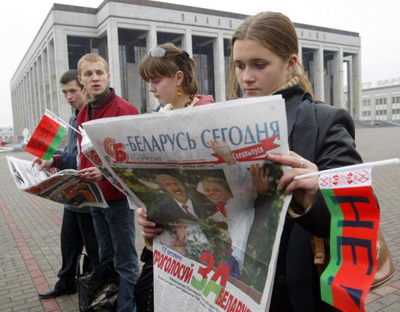 In Belarus in 2004, members of a smart mob met to protest a referendum allowing President Alexander Lukashenko to run for a third term.
Sergei Supinsky/AFP/Getty Images

"As it stands now, no city on Earth can't be shut down by 10,000 serious swarming protesters," writes author Alex Steffen. "Well trained in civil disobedience, linked by cell phones, e-mail, and online maps … protesters can flow across an urban landscape with a speed and coherence that leaves security forces scratching their heads" [source: Steffen].

Swarming is the operative word in Steffen's description; it is this characteristic that makes a mob a smart one. By being linked together via technology, members of smart mobs can receive word the police are on their way to a protest site, and leave quickly -- only to regroup in another area. As long as the police aren't privy to the communications the mob receives, the group should be able to remain one step ahead.

A throng of people protesting together in a set area is an easy target for containment. But if all of the protesters receive a simultaneous message to quickly disperse, the collective organism that is a protest can dissolve into its individual parts. The protest becomes just some people who may or may not know one another casually strolling downtown.

Smart mobs are beginning to have an impact on global politics. In 2001, Filipino President Joseph Estrada was ousted from power due in part to smart mobs linked by text messages and forming public protests against him [The New York Times].

While the smart mob that unseated Estrada sought to remove a corrupt official from power, there is also the potential for a dark side to smart mobs. They can pose as much danger to humankind as they do an advantage. Rheingold writes "I deliberately used the word 'mob' because of its dark resonances" [source: Edge]. While smart mobs can organize peaceful protests and create helpful networks for gathering and disseminating information for public consumption, they can also stage terrorist attacks and bloody coups.

Does this justify the transition that Rheingold fears the public will be forced into -- from using emerging technology for novel applications -- to being forced to use devices in the manner for which they've been created by a core group that controls technology? In other words, does the potential for the abuse of emerging technology for evil outweigh the potential benefits of the enlightenment it can also impart?

One of the many quotes for which Benjamin Franklin is famous may provide some insight into this dilemma: "They that can give up essential liberty to obtain a little temporary safety deserve neither liberty nor safety" [source: Ashcroft].

But by Howard Rheingold's definition, smart mobs needn't have any kind of agenda -- subversive, dark or otherwise. They can simply be groups of people outside of industry or corporations who are linked together via technology to achieve a common goal, or even just to have fun. Read about some variations on the smart mob theme on the next page.