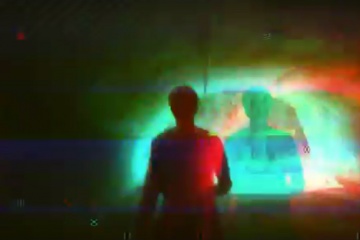 The Marble Hornets guys were no strangers to the effectiveness of creepy footage.
Screen capture by HowStuffWorks.com

Back in 2006, a film student named Alex Kralie began filming a project he titled "Marble Hornets." As filming progressed, his crew began complaining of their director's increasingly bad temper. Then, a few months into the project, Alex suspended filming indefinitely. Dismayed by the thought of so much work going to waste, his friend and fellow film student, Jason, asked to see the footage. Alex agreed on the condition that they never talk about it. Unnerved, Jason put the footage aside and forgot about it. A short time later, Alex transferred to another school, and the two friends fell out of touch. Jason unpacked the footage from the "Marble Hornets" project and began watching, uploading it to YouTube as he went [source: Nolfi].

This is the opening premise of the Web series "Marble Hornets" by Troy Wagner and Joseph DeLage. While the Slender Man mythos grows in multiple genres and on various websites, nowhere has he gained more popularity than in the YouTube series "Marble Hornets." As the series unfolds, it becomes apparent that the reason Alex abandoned his project was because of a mysterious, faceless villain referred to as The Operator — Slender Man by another name [source: Nolfi].

Though Wagner and DeLage created the series, it's been referred to as an ARG, an alternate (or augmented) reality game. In essence, this refers to the fact that the story has multiple authors and uses various devices to give the impression that it's non-fiction. Fans create and upload additions or side stories in the form of text, film and animation. For instance, a YouTube channel called "totheark" has dozens of supplementary videos, and in August 2015 an outfit called THAC started uploading a spinoff series called "Clear Lakes 44" to the "Marble Hornets" channel, since renamed "Clear Lakes 44/Marble Hornets" [source: TV Tropes].

With nearly half a million subscribers, the "Clear Lakes 44/Marble Hornets" series has proved enormously popular. The introductory clip alone has been viewed nearly 4 million times. Even the late, legendary Roger Ebert gave the series his approval. Given all this, it was inevitable that the film industry would come knocking. A feature-length film version came out in 2015, but it was poorly received, earning less than three stars on Rotten Tomatoes. Another "Slender Man" movie was released in 2018, also to terrible reviews.

It's hardly surprising that the silver screen didn't match up with this myth successfully. Slender Man's real home, the environment in which he thrives, is the seething, fecund swamp from whence he sprang: the Internet.

It seems inevitable that Creepypasta received a great deal of negative attention in the wake of the Wisconsin stabbing. The site's deliberate effort to blur fact and fiction was dangerous, some felt. But of course, that blur is what makes it popular. The administrator of Creepypasta has been quoted urging parents to teach their children how to differentiate fantasy from reality. Not bad advice, but the truth is most kids can do that from a relatively early age. Those who can't might have deeper issues. It seems to me that what lies behind the fascination with stories like the Slender Man stabbing is a societal unwillingness to deal compassionately with mental illness. Strange stabbings and school shootings might sell the news, but at some point we have to stop sensationalizing random violence while stigmatizing the mental health issues that might be contributing factors.