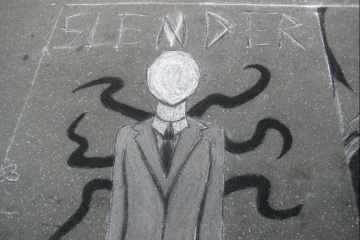 Not even your sidewalks are safe.
mdl70/flickr/CC BY 2.0

What are folktales? They're the stories a culture tells itself collectively. In telling and retelling, adding and subtracting, diverging and returning, we create narratives that gain ever-increasing meaning and power. To use the academic jargon of the day, folktales articulate the anxieties that preoccupy us. Slender Man taps into a thread that's a near constant in folktales from Rumpelstiltskin to Hansel and Gretel: the fear of losing children.

In recent years, more than one scholar has argued that Slender Man is a manifestation of a new kind of myth-making gaining traction in the Internet age. Seen in this light, Slender Man's proliferating storylines on the Creepypasta site are a kind of hyper-folklore, where the old modes of collectively building a set of stories around a given character have been sped up and amplified by 21st-century technology [source: Singal].

And while folktales have always hovered in the half-light between fantasy and reality, this quality has been ratcheted up in the digital age. Photographs altered to appear real and proffered as further documentary evidence of Slender Man's existence add a dimension of authenticity beyond anything an old-school storyteller could conjure when trying to convince listeners that werewolves or other monsters really exist. Of course, suspension of disbelief is still necessary, but for those already predisposed to engage, at least temporarily, in magical thinking, Photoshop helps.

But despite these new elements, it seems that Slender Man, along with other digital folktales, fulfills a function in people's lives similar to that of the old-fashioned stories. He's like a post-modern mashup of the Headless Horseman, the Hansel-and-Gretel witch and the Grim Reaper. In other words, he's a new and creepy manifestation of Death.

That so many kids are drawn to the tales despite the fact that they make up the bulk of his victims speaks to children's preoccupation with mortality as they grow into adolescence. For adolescents especially, who are tasked with learning to face some of the grimmer realities of adulthood, a figure like Slender Man can provide a "symbolic vessel" through which to play out some of their newfound fears [source: Singal].