Slender Man in the Real World 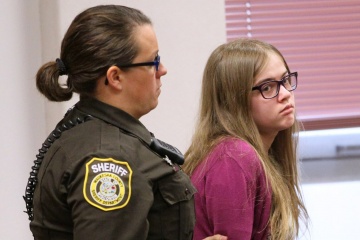 Morgan Geyser was brought into court by a sheriff's deputy during the August 2015 arraignment of the Slender Man stabbing trial in Waukesha, Wisconsin.
Michael Sears/Milwaukee Journal Sentinel/TNS via Getty Images

It's Saturday, May 31, 2014, in the Milwaukee suburb of Waukesha, Wisconsin. Three girls wake up from a sleepover, eat doughnuts and strawberries for breakfast, play dress-up for a bit and then head to a nearby park. Bella, the most sociable of the three, walks in front. Morgan, the dreamer, walks behind with the third girl, Anissa. As they stroll, Morgan shows Anissa a steak knife she's hidden under her jacket. It's a signal that a long-planned event is about to take place.

At a public restroom, Anissa and Morgan half-heartedly rough Bella up. But Morgan, who is prone to somewhat erratic behavior, breaks off and starts singing and pacing back and forth. A short time later, the three girls play hide-and-seek. Urged on by Anissa, Morgan jumps on top of Bella and stabs her 19 times in the arms, legs, pancreas, liver and stomach, narrowly missing an artery. Anissa guides the wobbly, screaming Bella deeper into the woods and tells her to lie down. Morgan tries to stanch Bella's bleeding with a leaf, and then she and Anissa wander through the woods to the nearest Walmart where they wash off the blood in the restroom.

Bella survives, dragging herself to a road where a passing cyclist stops to help her. When the cops interview Anissa and Morgan, the girls explain that by killing Bella they hoped to be initiated into Slender Man's circle. The blood sacrifice would earn their entry so they could be numbered among his minions and live with him in his forest mansion.

During the press conference that follows, the police draw attention to the Slender Man myth's influence on the attack and urge parents to be aware of the danger. Children must be taught the difference between fiction and reality. Suddenly, Slender Man is international news. Who he is and what he means for the culture at large become hotly debated issues [source: Miller].

But blaming Slender Man misses the mark. Many people who commit acts of violence cite figures from pop culture as their inspirations. In 1981, after seeing the film "Taxi Driver" at least 15 times and driven by a desire to get the attention of actress Jodi Foster, John Hinckley Jr. attempted to assassinate President Ronald Reagan. James Holmes, the young man who killed 12 people and injured 70 at a screening of a Batman film in 2014, claimed to be Batman's nemesis, the Joker. In 2009, Anthony Conley strangled his brother to death with his bare hands, later saying that he identified with the character of Dexter, the serial killer from the TV show of the same name. The list goes on and on [source: Lifshitz].

When questioned, Anissa renounced her belief in Slender Man. After all, she wasn't the one who actually carried out the stabbing. Morgan, the girl who did, professes to still believe that Slender Man is real. She's been diagnosed with a rare form of early-onset schizophrenia [source: Vielmetti]. Mental illness, and how we as a society deal with it, could be the real issue at the heart of the Slender Man stabbing and possibly some of the violent acts cited above.