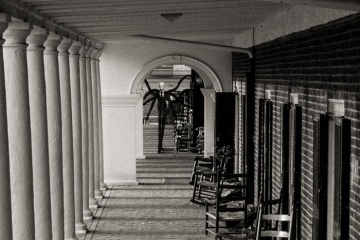 Far back in the mists of time, in 2009 to be precise, a Photoshop wiz named Eric Knudsen, using the nom de guerre Victor Surge, decided to post some of his work on the comedy website Something Awful. On a thread titled "create paranormal images," he uploaded vintage photos doctored to include a tall, skinny, faceless figure with long tentaclelike arms lurking in the background near children at play [source: Stampler]. The invention became a meme.

As a meme, Slender Man has had a robust life on the website Creepypasta, a forum where people post spooky stories. He also appears in YouTube videos, alternate reality games, blogs, fan art, cosplay and wiki pages.

As Slender Man's presence grows, we've learned that not only does he abduct children, but he's also capable of causing something called "slender sickness," with symptoms that include nausea and vomiting blood. He can induce madness and an affliction known as "scribbling in," which causes people to draw and write nonstop. In many cases, work devoted to Slender Man claims not to be fiction but, rather, documentary material recording his existence. An encyclopedia-style entry on the Creepypasta Wiki speculates on his long history, even suggesting that certain ancient cave paintings include depictions of him. Egyptian hieroglyphs from 5,000 years ago and 19th-century German woodcuts are also included in his origin story [source: Creepypasta].

This "evidence" of his existence seems to have made Slender Man strangely real for some people. And this confusion between fact and fiction is what brought Slender Man out of the shadowy corners of the Internet and into the harsh glare of mainstream media. It wouldn't be the first time that a faux-documentary fiction would have real-world consequences. Think of Orson Welles' infamous broadcast of "The War of the Worlds," during which some listeners were convinced that a real Martian invasion was underway. In the case of Slender Man, however, the people who became dangerously confused were 12-year-old girls.

The Birth of Memes

Back in 1976, biologist Richard Dawkins coined the term meme to describe a bodiless replicator, an idea that jumps from brain to brain, interacting, recombining, taking on a life of its own in the cultural soup [source: Gleick]. Language is the original vector for memes, but in the past two decades the Internet has sped the growth and evolution of memes a thousandfold.