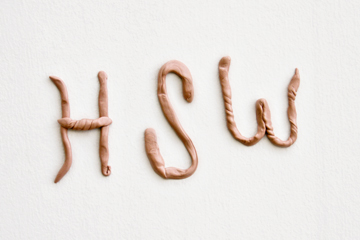 Look, if it hadn't been for James Wright, Peter Hodgson and all the other folks who had a hand in Silly Putty's creation, how would we be able to fashion these lovely letters?
Image courtesy Elizabeth Johnston/HowStuffWorks.com

The year was 1949. World War II had been over for four years, and James Wright's bouncing putty was still in circulation as an invention in search of a practical use. Unfortunately, no factory or manufacturing plant ever discovered an application for the goop. Peter Hodgson, who owned his own ad agency in New Haven, Conn., was at a cocktail party when he spotted the putty making the rounds. He watched as people spent minutes at a time folding, stretching and squeezing the strange stuff. He approached Ruth Fallgatter, owner of the Block Shop toy store, about listing the putty in an upcoming catalog Hodgson was helping to produce. Fallgatter agreed, and the two decided to list it on a page with other adult gifts for the price of $1 [source: Miller].

The bouncing putty became one of the Block Shop's biggest sellers. For reasons that remain unclear, Fallgatter declined to market the product any further, but Hodgson saw its potential. He borrowed $147 to order another batch from General Electric, then hired a Yale student to place 1-ounce (28-gram) wads in plastic eggs. At the same time, Hodgson began to brainstorm names for his product. He evaluated 15 possibilities, but eventually settled on Silly Putty, for which he secured a trademark. Next, he established Arnold Clark Inc. to sell the stuff and contracted with some chemical engineers in Schenectady, N.Y., to derive a recipe based on General Electric's original formula. Hodgson opened a manufacturing plant in North Branford, Conn., to make Silly Putty and, soon after, landed his first customers -- Neiman Marcus and the Doubleday bookshops [source: Crayola].

Then, in August 1950, The New Yorker featured Silly Putty in its Talk of the Town section:

We went into the Doubleday bookshop at Fifth Avenue and Fifty-second Street the other day, intending, in our innocence, to buy a book, and found all the clerks busy selling Silly Putty, a gooey, pinkish, repellent-looking commodity that comes in plastic containers the size and shape of eggs … we sought out Mr. Lee Weber, the manager of the bookshop, to ascertain the mysterious link between it and Doubleday. He told us that Silly Putty is the most terrific item the Doubleday shops have been privileged to handle since 'Forever Amber.'

With that endorsement in The New Yorker, interest in Silly Putty skyrocketed. Arnold Clark received more than a quarter-million orders in three days, and Hodgson's great gamble had paid off. The soft, malleable material soon became a fixture in homes across North America and eventually -- the world. When Hodgson passed away in 1976, Silly Putty was being sold throughout the United States and 22 other countries, with annual sales exceeding $5 million [sources: Haynes, McFadden].

Today, Silly Putty continues to amuse and entertain. Up next, we'll take a closer look at its unusual properties and how they can lead to a contradiction in terms.