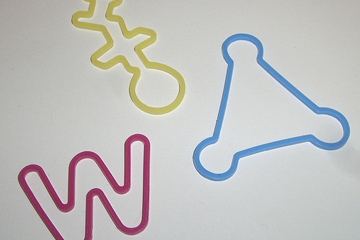 So far, we know that Silly Bandz are made of silicone rubber and come in shapes. That's all fine and good, but what the heck are people actually doing with them besides oohing and aahing as their bracelet comes off to reveal a blobby bear-shape?

First of all, let's establish who exactly is wearing these bands. Silly Bandz were first targeted toward elementary school-age children (manufacturer-recommended for ages 5 to 12) [source: Amazon]. While that certainly makes up the bulk of their audience, it's not limited to children.

Celebrities like Sarah Jessica Parker, Zooey Deschanel, Anthony Bourdain and Shakira have all shown up on red carpets or in paparazzi snaps sporting their favorite kid's fad. Teenagers -- perhaps propelled by a sense of irony -- have begun embracing the trend in 2011, wearing the bracelets to high school [source: Stone].

Now that we know who's wearing them, the question quickly becomes why. Like a lot of trends -- especially those popular among elementary school kids -- Silly Bandz aren't exactly answering life's larger questions. In general, the bands are traded for interesting shapes and styles (there are many debates about "rarer" Silly Bandz). Unlike older trends like Pogs, popularized in the '90s, or Pokémon trading cards, there is no "game" that goes along with Silly Bandz -- although any teacher with Silly Bandz experience will point to the age-old "shooting rubber bands at each other" game that can break out at any moment.

Many companies, celebrities and any number of endorsements have formed partnerships with Silly Bandz. Some seem to hit the target audience just right (Justin Bieber Silly Bandz, in the shape of his trademark baseball cap), while others seem a little bizarre (Kardashian Silly Bandz in the shape of a purse). NASA even got in on the game with special Silly Bandz for their Physics of the Cosmos program [source: NASA Blueshift].

Internationally, Silly Bandz have also made a big splash. By August 2010, Silly Bandz were getting buzz in Britain as the "next big thing." Even India reported children down with the Silly fad [source: YouTube].

But Silly Bandz aren't all fun and (no) games. Embracing the madness, shoot over to the next page to see how teachers are using the accessories for educational tools -- and how Silliness extends to far more than just Bandz.