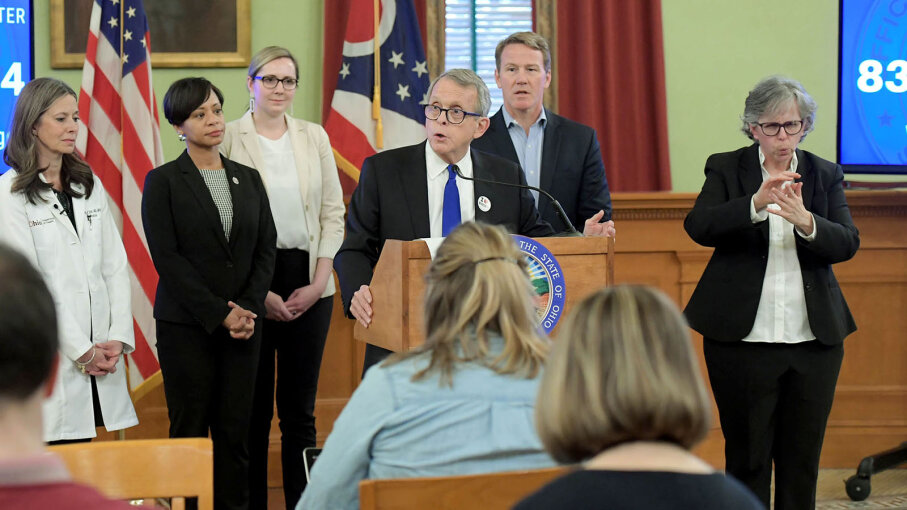 Every day at 2 p.m., residents across Ohio tune in to the state news conference for important updates on COVID-19. But they're not just watching Ohio Gov. Mike DeWine. Many are watching for the chance to see and support an unsung hero in the state's aggressive fight against coronavirus: certified deaf interpreter (CDI) Marla Berkowitz.

Since March 12, Berkowitz, who is also deaf and a lecturer at The Ohio State University, has been live on-air with DeWine and other government officials for every single briefing. She's keeping Ohio's deaf community informed about critical information that's delivered with the precision and comfort-level only CDIs can provide.

According to the Registry of Interpreters for the Deaf, Inc. (RID), CDIs are "deaf or hard of hearing and have demonstrated knowledge and understanding of interpreting, deafness, the deaf community, and deaf culture."

The pool of CDIs is smaller than that of hearing American Sign Language (ASL) interpreters, which is one reason Berkowitz has gained such a following. She's proving just how important CDIs are in times of crises. Just like it's often easier for, say, Italian speakers to understand other native Italian speakers (versus those with Italian as a second language), it's easier for the deaf community to understand ASL from native speakers who rely on it (versus those who learn but don't necessarily need it for all communication).

Communicating With the Deaf Is Critical During Crises

For these news briefings, Berkowitz doesn't work alone. The Ohio state press conferences have three ASL interpreters: a freelance CDI (Berkowitz) and two hearing staff ASL interpreters (Christy Horne and Lena Smith). The three work together to get the right message across quickly.

"ASL interpreting is an interactive process involving two languages and two cultures, one being a visual language (ASL) and deaf culture and the other being a spoken language (English) and hearing culture," Berkowitz says via email. "What CDIs like myself do is look at the form structure of the English message presented to us by hearing ASL interpreters and reformulate the entire message into ASL — all while making sure we're in conjunction with the timing of the speaker's message."

Berkowitz' brain works incredibly quickly to piece all of these elements together — with the pressure of live television. Every. Single. Day. For many, this sounds like their worst nightmare. Berkowitz, who started informally interpreting during childhood, was born for the job.

"When I was a young student at a residential school for the deaf in NYC, we would have teachers not fluent in ASL, and my deaf classmates would ask me what the teacher was saying," she says.

That was the 1970s. In the 1980s, Berkowitz went on to provide social and mental health services to the deaf community and was often asked to work as an interpreter between the hearing staff (with subpar signing skills) and the community. Then, she got a job as a lipreader for the family of a man who lost his voice in the hospital before ultimately working toward her CDI certification with the RID. This certification — she's now the only ASL CDI certified for the state of Ohio — helped her land the high-profile role of on-air CDI for the daily COVID-19 briefings.

"Opportunities for Ohioans with Disabilities contacted Deaf Services Center, and they specifically requested me," Berkowitz says. "The deaf-hearing interpreting communities are tight-knit."

When Bogus Interpreters Slip-through the Cracks

It's not surprising to see states moving toward reliable and respected CDIs and interpreters like Berkowitz in times of crisis. Deaf communities around the globe have been let down — in some cases dangerously — through phony or under-experienced interpreters who know little to no sign language.

Case in point? In 2013, world leaders eulogized Nelson Mandela in Johannesburg, South Africa, with the world watching. Those in the deaf community couldn't participate because a fraud interpreter was signing nonstop nonsense. According to The Associated Press, "He later said he is schizophrenic and had seen angels descending in the stadium where the event took place."

Fast forward to Hurricane Irma in Manatee County, Florida, in 2017. There, a county employee who had limited sign-language knowledge (through communicating with his deaf brother) was tasked with interpreting news about mandatory evacuations for the local deaf community. As hearing viewers packed up and prepared for the worst, the deaf community was left with gibberish communication including the signed words "pizza" and "bear," according to the AP.

ASL Is a Visual-gestural Language

Many phonies, like the faux South African interpreter, think adding emotive facial expressions to their signing will make them more believable. That's because CDIs and ASL interpreters are nothing if not energetic while signing, but each and every movement has a specific purpose.

"We have grammar markers which indicate whether the speaker is authoritative or calming; all of these are heard as vocal intonations which deaf people do not hear," Berkowitz says. "It adds nuance to convey a message like 'stay home' with a stern face to emphasize it."

Additionally, Berkowitz notes that distinguishing between COVID-19 and, say, SARS or MERS, requires the interpreter to fingerspell it.

"Or, if we're to emphasize the behavior of coronavirus like attacking, spreading or dying, our signs would look different in conjunction with our facial expressions and body movements," she says. "ASL appears theatrical or dramatic to anyone unfamiliar with it; however it is how we convey the message accurately and meaningfully to the general public who use ASL as their language for communication."

Sign language interpreters like Berkowitz (second from left) use dramatic facial expressions and body movements that appear theatrical or dramatic to anyone unfamiliar with the language.
Courtesy of Ohio Development Services Agency
NOW THAT'S INTERESTING
Ohio residents are going above and beyond to cheer on Marla Berkowitz. Their latest endeavor? A Facebook fan club. The 1,000 members in Marla Berkowitz's fan club share everything from personal stories to homemade paper-doll cutouts so kids can learn about Berkowitz and the ASL interpreting crew.