The Magical Significance of the Shrunken Head 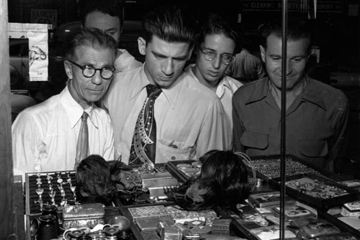 Were they real, the shrunken heads these New Yorkers view with curious interest in a shop window in the 1950s would have been worn by a Shuar warrior in a succession of celebrations before losing their spiritual significance.
Doreen Spooner/Keystone Features/Getty Images

While it is also a matter of practicality in preparation, sewing the eyes and mouth of the victim shut also has a ritual significance. Namely, with its eyes sewn shut, the spirit of the victim can't see and with its mouth sewn shut, it can't call for vengeance from its own family.

The taking and shrinking of a head was, for many years following contact with Europeans, taken as merely a war trophy turned into an adornment. Indeed, the warrior who took the head does in fact wear the tsantsa for between a month and a year. The tsantsa is more than a mere trophy, however. It is both the physical means by which the victim's spirit -- the muisak -- is trapped and kept subservient and tangible proof for the spirit of the warrior's dead family member that he has carried out the necessary revenge.

This first celebration is called numpenk, or "his very blood," and the raiding party dances with the tsantsas they took to reenact the battle for the others in the household. Two other feasts -- amianu and napin -- are held to complete the appeasement of the dead and further enrich the social standing of the warriors. Amianu means "fulfillment," and is held approximately a year after the raid [source: McGuiness]. After this celebration, the warrior's obligation to his deceased to exact revenge is fully satisfied.

It is here that the tsantsa, what was once a prized and magical possession, loses all of its value and significance. Once the feasts and celebrations are completed and the dead are appeased, the shrunken head becomes meaningless and may be discarded. In some cases, they become toys for children in the family, but more frequently after Europeans arrived in the area, they were used for currency in trade. It was demand for tsantsas among white settlers that led to an escalation of intertribal warfare and a counterfeit shrunken head trade.