Should you ever break a 'no gifts' rule?

Browse the article Should you ever break a 'no gifts' rule? 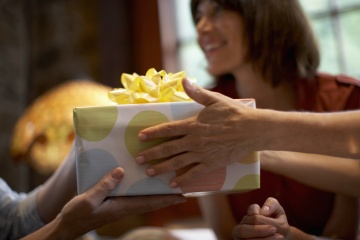 Don’t be that person who brings a gift to a “no gifts” party — it'll be awkward for you and the host.
Kim Carson/Photodisc/Thinkstock

Yes. If you live in my house and I say to you, "Maybe we shouldn't do presents this year," I am lying to you. You absolutely should A) pretend you're going along with the plan but then at the "last minute" admit you just couldn't handle the thought of not giving me a present or B) cut it off at the quick by rolling your eyes and saying, "Obviously, I'm going to get you a present for the occasion/you just being you." The point being: In this case, the "no gift" rule is a farce, designed to make the receiver feel like a good person for suggesting it but relieved when the suggestion is scuttled.

However, this is not actually true in a situation where romantic or familial ties are absent. In our society, we're asked to believe that most people in most situations are telling the truth. As much as it pains some of us, we are not actually in charge of doing what we think is best for other people at all times, regardless of their stated desires. When we get an invitation that requests no gifts? We better believe it.

Let's remember, of course, that you're probably not the only person invited to the event. (No offense to you, but it isn't much of an event if you're the only one there.) That means all of you have been told to bring no gifts, and it puts the other guests in an awkward position if you walk in carrying a wrapped iPad for the host. Nobody likes to feel they were a negligent guest, especially when they were the ones following the host's instructions.

Now Miss Manners has another take on all this. She firmly believes that saying "no gifts" on an invitation is tasteless anyway and that hosts shouldn't mention gifts at all — even to avoid them [source: Martin "Guide"]. She advises that if you don't want gifts for an event we generally assume requires one (e.g., birthday, wedding), simply don't mention that the event is being held for that specific purpose [source: Martin "Generosity"]. Instead, just issue an invitation for a party, and leave it at that, until you make a small announcement or toast to the occasion.

But are you allowed to break the no-gift barrier? Sorry, not having it. Good guests follow the host's instructions or politely decline the invitation should they find it disagreeably demanding.