The Future of Sherpas 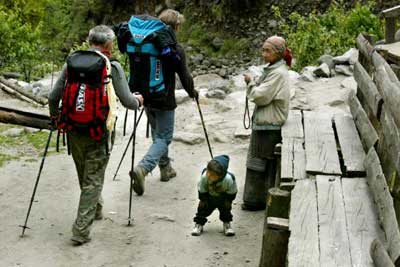 Although younger Sherpas are moving out of Solu-Khumbu, a National Geographic study found that Sherpas are not worried about the influence of Western tourists.
Paula Bronstein/Getty Images

Thanks to Mount Everest tourism, Solu-Khumbu has taken many steps toward modernization. A hydroelectric plant supplies power, and music stores, pool halls and Internet capacity are other new conveniences. In fact, almost everything that Sherpas or tourists need is for sale nearby, particularly in the southern village of Namche Bazaar. On the flip side, deforestation and pollution from centuries of Sherpa land use and the influx of tourists has threatened the region's environmental health. In response, the government has enforced stricter environmental protection laws and restrictions.

Regardless of the economic improvements and new schools and hospitals, the area still offers few educational or professional opportunities. For that reason, the population has dwindled in recent years with about 3,500 people living in the Sagarmatha National Park. The younger generations in particular are moving away from their high-altitude homeland into outlying villages and more urban cities like Kathmandu, Nepal's capital. In spite of this apparent threat to the existence of the traditional Sherpa culture, a National Geographic study found that Sherpas are not overly concerned about the influence of Western tourists [source: Reid and Kendrick].

Nevertheless, some feel that the spiritual devotion inherent in the land has given way to worldly pleasures. For Sherpas involved in the climbing industry, Khumbu has become a lucrative location. Many climbers pay around $65,000 per expedition, with Sherpas earning upwards of $2,000 a trip. Compared to Nepal's per capita Gross National Income of $331 in 2007 [source: World Bank], successful guides can grow rich by local standards. Multiply that by the 20,000 tourists who travel through each year [source: Reid and Kendrick], and you see the force of the industry.

Sherpa children at a school funded by the Himalayan Trust.
Paula Bronstein/Getty Images

Some Sherpas, like Apa Sherpa, have also started their own trekking businesses or own hotels and lodges. Interestingly, Apa says that he wishes he could have had a better education and become a medical doctor, rather than make a life out of climbing. Even though he holds the record for the most number of Everest summits with 17 successful attempts, he only climbs to afford a brighter future for his children and donates some income from his trekking business to a Sherpa educational fund. Apa shares the sentiment of many other Sherpas who also want to provide more for their children.

Even with this cultural shift, one integral aspect of Sherpa life has not changed: the walking. Still today, no automobiles clog the footpaths in Solu-Khumbu, and it seems it will stay that way. Walking is what brought the Sherpas to where they are today and is what will take them into the future.

For more information on the Sherpas and Mount Everest, read the links below.

Plight of the Porters

Porters, who tote climbing cargo weighing up to 100 pounds (45 kilograms) up the mountain, do not share a bulk of the wealth accrued from the Himalayan tourism. In fact, many porters are now people from other ethnic groups who migrate to Solu-Khumbu during the climbing season to earn extra money. But that additional income may only amount to the equivalent of a few dollars a day in exchange for the strenuous labor. Some also report poor working conditions and not being given appropriate clothing and equipment for the intense environment. In response, groups such as the International Porters Protection Group advocate for porter safety and fair wages. They work with trekking agencies and climbers to raise awareness about the need for shelter, warm clothing and reasonable loads in the high altitudes and enforce ethical treatment on the slopes.