Lay of the Sherpa Land 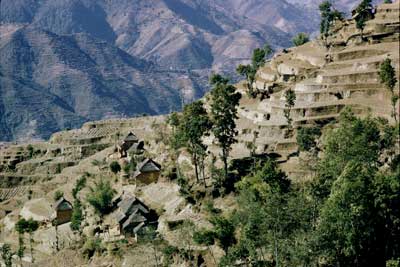 Hundreds of years ago, Sherpas crossed through the Nangpa La mountain pass to arrive in the southern slopes of Mount Everest. They first settled in the higher altitudes in the Khumbu valley, between 11,000-foot and 13,000-foot (3,352-meter and 3,962-meter) altitudes. Gradually, they fanned out toward to the Solu region between 6,500 feet and 10,000 feet (1,981 meters and 3,048 meters). To survive on the mountainous inclines, Sherpas literally carved out terraced fields for farming, transforming the slopes into wide earthen staircases. Stone walls built against the steps support the staggered plots.

Stony ground and scrubby plants like juniper bushes and rhododendron cover the Khumbu area. As you move down to the Solu valley, pine and hemlock trees attest to the more fertile soil.

Although the Solu-Khumbu region lies in sub-tropical latitudes, the steep altitudes make for a chillier climate. While cold, the seasonal temperatures in the populated areas do not plunge into arctic extremes. Winter hovers below 30 degrees Fahrenheit (-1 degree Celsius) with summers reaching upwards of 50 degrees Celsius in lower lands. Most climbers attempt to summit during April and May when the weather is warmest before the annual rain. Then, from June to September, Sherpas endure monsoon season.

Because of threats of deforestation and the growing number of tourists attracted to the area, the Khumbu valley was protected as the Sagarmatha National Park by the government of Nepal in 1976 and designated as a World Heritage Site by the United Nations in 1979. Saragarmatha is the Nepalese name for Mount Everest. Around 3,500 Sherpas live in the park, many of whom are engaged in the mountain-related tourism.

Aerial view of the Solu-Khumbu region at the base of Mount Everest.
Paula Bronstein/Getty Images

Sagarmatha National Park hosts an array of exotic animals, such as snow leopards, red pandas and musk deer. Other interesting fauna include the Himalayan tahr, which looks like a huge goat with an overgrown beard, and Nepal's national bird, the rainbow-colored Impeyan pheasant.

When it comes to domesticated animals, yaks are the Sherpa's preferred beasts of burden. Yaks are well-suited to the high-altitude life with large hooves that can navigate snowy paths and strong bodies. They also have larger lungs and more red blood cells to allow them to better survive the lower-oxygen levels in high altitudes [source: Animal Info]. On the outside of their bodies, thick layers of shaggy fur protect them from icy temperatures. Yaks also serve as a food source for Sherpas. Yak milk, yak butter and yak meat comprise part of Sherpas' diets. In lower elevations, Sherpas may use zopkios, or male cow-yak crossbreeds, for similar tasks.

Because Sherpas live at the top of the world, they live at much higher altitudes than do most people who live in other parts of the world. Find out more about Sherpa life at those altitudes on the next page.

Not only is Sherpa the name of an ethnic group and a generic term for a mountain guide, it is also a common last name in the Sherpa group. Many people in the Solu-Khumbu region carry Sherpa as their last name, although it sometimes isn't formally used. For example, Tenzing Norgay is actually Tenzing Norgay Sherpa, but the Sherpa is usually left off.