Senate Write-in Candidates Rarely Win, But It Has Happened

Browse the article Senate Write-in Candidates Rarely Win, But It Has Happened 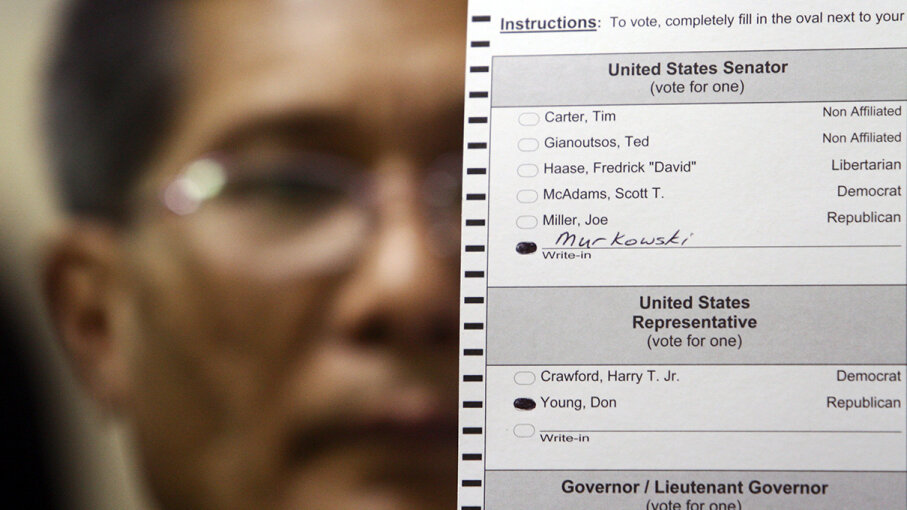 U.S. Sen. Lisa Murkowski, a Republican from Alaska, is just one of two senators to be elected by write-in vote after narrowly defeating the Republican nominee Joe Miller and Democrat candidate Scott McAdams in the 2010 general election. Eric Engman/Getty Images

A new complication has developed in the hotly contested special election campaign for a U.S. Senate seat in Alabama, where Republican nominee Roy Moore — rocked by sexual allegations that Moore has vigorously denied — is in a tight race with democratic candidate Doug Jones. Now Lee Busby, a retired Marine colonel who once served as an aide to current White House chief of staff John Kelly when he was a Marine lieutenant general, has announced that he will join the race as a write-in candidate. (Other write-in hopefuls also have declared their candidacies.)

In an interview on MSNBC's program "Morning Joe," on Nov. 28, Busby said he was running because he was discontented with the candidates from both parties and sensed that other voters felt the same. "There's this huge swath in the middle that feels like they're not represented there," he said.

Despite entering with less than two weeks until the Dec. 12 special election, Busby told the morning show hosts he thinks the race is winnable. He calculates that he can win the election if he can attract 200,000 votes. That would require "getting people out to vote who otherwise were not going to do it," and educating them about how to cast a write-in vote.

Rules for Writing in a Candidate

In Alabama, election regulations require voters who want to write in a candidate shade in the circle next to "write-in" on the ballot to ensure that the vote is tabulated. Then they must declare the candidate of their choice's full surname, though initials are acceptable for the first and middle names. Voters don't necessarily have to spell the write-in candidate's name correctly, as long as they get it close enough so that their intention can be "reasonably determined" by election officials who review the ballot.

And even if Busby does manage to get enough votes to win, it might not be apparent on election night. Al.com reports that a law passed by the Alabama legislature in 2016 stipulates that write-in votes aren't counted until seven days after the election, and then only if the total number of write-ins is greater than the difference between the votes received by the top two candidates whose names are printed on the ballot.

Such legal complexities — which vary from state to state — are just one reason that write-in candidates generally face difficult odds. Five states — Hawaii, South Dakota, Nevada, Louisiana, and Oklahoma — ban write-ins altogether, according to Richard Winger, editor of the website Ballot Access News. Other states prohibit them in primaries but allow them in general elections. "California allows them for non-partisan offices and primaries for president and primaries for all other partisan offices, but bans them for congress and state partisan offices in the general election," Winger explained in an email.

But even if a state allows write-in votes, casting them and getting them to count isn't always easy. Winger says that some states that use voting machines provide keyboards for voters to type in candidate's names, but most use paper ballots counted by machines. "These are problematic because then write-in voters must "X" the box next to the write-in line, and some voters forget to do that, so they lose their vote," he said.

How Likely Is a Write-in To Win?

But that doesn't mean it's impossible. In recent U.S. political history, a handful of candidates for the U.S. House and Senate have managed to win victories.

According to the U.S. Senate website, the first senator to be elected as a write-in in a general election was in 1954, when South Carolina's incumbent Democrat, Sen. Burnet Maybank, who'd won the nomination in a primary, died unexpectedly two months before the general election. With little time, the state Democratic Party's executive committee decided not to hold a primary to replace him, and instead hand-picked its own nominee, a longtime party loyalist and state senator named Edgar Brown. They didn't realize that the backroom political maneuver would offend South Carolina voters.

That enabled the state's former governor, Strom Thurmond, to capitalize on the outrage. He denounced the party leaders and ran as an independent write-in candidate, with the proviso that if elected, he would caucus with the Democrats. That November, Thurmond won with a rousing 63 percent of the vote. He went on to win reelection in 1956, and after changing his affiliation to the GOP in 1964, served in the senate for nearly a half a century before retiring in 2003, according to his New York Times obituary.

The only other example of a victorious senate write-in candidate is Sen. Lisa Murkowski, the Alaska Republican, who as a two-term incumbent was defeated narrowly in that state's 2010 primary election by tea party challenger Joe Miller. Despite that, she ran as a write-in and managed to defeat Miller and Democrat Scott T. McAdams in the November general election, taking 39.7 percent of the nearly 255,000 votes cast, compared to 35.6 percent for Miller and 23.6 percent for McAdams, according to Ballotpedia. She was the first successful write-in candidate to the senate since Thurmond in 1954.

But both Thurmond and Murkowski had an advantage that Busby and most write-in candidates don't possess. Both already were prominent politicians in their states with a high degree of name recognition. Murkowski, for example, is the daughter of her state's longtime U.S. Senator, Frank H. Murkowski, who appointed her to fill out his term in 2002 after he was elected governor. And as this 2010 Anchorage Daily News article details, even though she lost the 2010 primary, Murkowski remained so popular that when she went to dinner in Anchorage, even her waiter urged her to run and promised to volunteer in her campaign.

Winning write-in campaigns "are very unusual, because they arise on rare occasions and are difficult to execute," Jan W. Baran, a Washington-based attorney with the firm of Wiley Rein who specializes in campaign and election law, wrote in an email. "For example a campaign must educate voters on how to write in a candidate's name. Furthermore a candidate may have a name that is difficult to spell. Senator Murkowski was victorious in part because she was well known and the daughter of a former Alaska senator and governor. Alaskans had decades of familiarity with the name and the spelling."

In the end, it's preferable for a candidate to gain ballot access, even if that means running as an independent or third-third party candidate, as incumbent Sen. Joe Lieberman did after losing Connecticut's democratic primary in 2006. In the November election, he ended up besting the party's nominee, Ned Lamont, by 49 percent to 40 percent, in the general election.

"It usually is easier to gather signatures on a ballot petition than to conduct a write-in campaign," Baran explained. "That is why write-in efforts are always last minute after ballots have been set and due to extraordinary circumstances."

Now That's Interesting
In 2006, Charlie Wilson, a democratic candidate for a U.S. House seat in Ohio, failed to get enough signatures on his election petition to qualify for a spot on the ballot in the democratic primary. But with the support of the Democratic Congressional Campaign Committee, he managed to win the nomination as a write-in candidate, garnering more than 65 percent of the vote. Wilson went on to win the election and serve two terms in Congress, according to his Associated Press obituary.