Senate Confirmations in the Modern Era 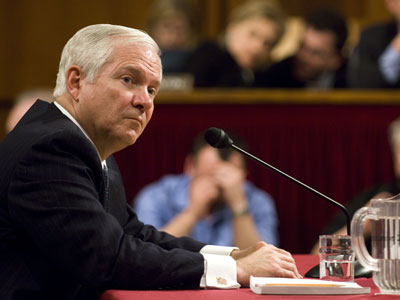 Robert M. Gates during the 2006 hearing for his appointment to Secretary of Defense.
Scott J. Ferrell/Congressional Quarterly/Getty Images

In the United States, Supreme Court justices attract the most attention from the Senate during the confirmation process. Justices are appointed for life; they leave their seats by death, by resignation or by retirement via impeachment. For this reason, the Senate is acutely interested in the political, legal and personal philosophies Supreme Court nominees hold. Cabinet secretaries bear only slightly less scrutiny.

These hearings can be arduous. If the Senate rejects the President's first choice for a position, he or she will generally submit another nominee and the process continues until that vacant position is filled. There are several circumstances under which vacancies can occur in appointed positions. An appointed official can be fired or retire from the position. The vast majority of vacant federal posts are the result of the transition from one presidency to another. High-ranking appointed positions in the executive branch expire by law after four years. Since most of these posts are filled by a president early in the administration, they expire at the end of a term, leaving them vacant for appointment by an incoming president.

An incoming president may choose to reappoint a person from the previous administration, as Democratic President-elect Barack Obama did in 2008. He nominated Republican President George W. Bush's Secretary of Defense, Robert M. Gates, during his transition into the White House. This is rare, however; presidents generally want their own people -- especially people from their own party -- to help carry out their agendas.

In 1929, the Senate officially opened confirmation hearings to the press and the public. As a result, confirmation hearings evolved from a process shared by an elite few to a public discussion on nominees and the issues raised by their nominations. These examinations can be uncomfortable for candidates. In 1987, President Ronald Reagan nominated conservative U.S. Court of Appeals judge Robert Bork for the Supreme Court. Bork's nomination sparked a months-long publicity campaign among supporters and opponents alike. Liberals feared Bork's conservative record and conservatives launched a campaign to portray Bork as a moderate [source: Lamar]. Celebrities and politicians took to the airwaves and newsprint to defend publicly or denounce Bork, who was ultimately rejected by the Senate. Bork's nomination created what may have been the first truly national dialogue over a presidential appointment.

Three years later, President George H.W. Bush nominated appeals court judge Clarence Thomas to the Supreme Court. News leaked during the hearings that a former colleague, Anita Hill, had alleged in a routine FBI investigation that Thomas had sexually harassed her repeatedly a decade earlier. Although her testimony had no legal bearing, Hill was allowed to testify at the hearings. Thomas vehemently denied the allegations and was ultimately confirmed. Because of the intense media scrutiny as well as Hill's poise and willingness to discuss the issue, the Clarence Thomas confirmation hearings are now generally credited with shedding light on the effects of sexual harassment [source: Beasley].

Ultimately, most presidential appointments are confirmed, but this figure isn't wholly representative of the obstacle course that is the presidential appointment process [source: Tong]. For example, it fails to include the countless nominees who, like Zoë Baird, withdrew their names in the face of public pressure or imminent rejection from the Senate. Over the course of U.S. history, Senate approval has become mired in political theater.