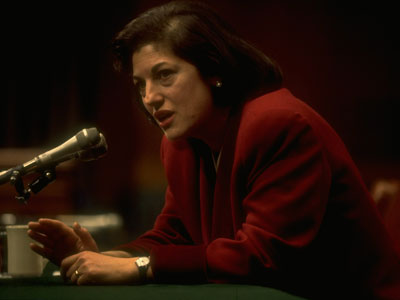 January 1993 was a truly bad month for Zoë Baird. The 40-year-old Connecticut attorney had just been tapped for appointment to attorney general by newly elected president Bill Clinton. The future was bright for Baird. Should the Senate confirmation hearing go smoothly (and there was no indication it wouldn't), Zoë Baird would become the United States' first female attorney general. The hearings, it turned out, would not go smoothly.

Following the election, after Baird knew Clinton was planning on installing her in his White House, she fired a Guatemalan couple who'd worked as her driver and housekeeper from 1990 to 1992. Both were illegal immigrants; they knew it, Baird knew it and, most importantly, the Clinton camp knew it. Baird had told her friend and Clinton's selected secretary of state, Warren Christopher, about her undocumented workers during a meeting in Little Rock, Ark. The Clinton transition team initially thought little about the matter. "Everybody does it," one aide later remarked [source: Smolowe].

The press immediately took collective issue with Baird's actions. On Jan. 14, the New York Times ran a front page story on Baird's hiring of illegal workers and the inherent tax evasion she'd committed by failing to file payroll taxes on the wages she paid the couple [source: Borelli]. Unfortunately, Baird's Senate confirmation hearing -- the legislative branch's means of vetting candidates for presidential appointments -- was already underway. In one day, Sen. Paul Simon of Illinois received more than 1,000 calls from his constituents, many demanding his vote against Baird's confirmation [source: Smolowe].

The public had spoken; Baird would not do as attorney general. Before the Senate could reject the nomination, however, she withdrew her name from consideration. It took President Clinton two more tries before the Senate confirmed Janet Reno as his administration's attorney general. It would take nearly nine months after the Baird debacle to fill all of Clinton's appointed positions [source: Light].

What's ironic is that the Senate confirmation process is essentially a simple one. Find out how easy the process should be on the next page.