A new petition calls for the abolishment of Saudi Arabia's male guardianship system.

In Saudi Arabia, women of all ages have a male legal guardian — usually a father, brother, husband or son. A Saudi woman needs permission from this guardian to marry, and must be accompanied by him or another male relative when traveling abroad. She can be asked by institutions like schools, potential employers and hospitals for proof that she has his approval before she'll be allowed to study, work or receive a medical procedure.

Aziza Al-Yousef, a Saudi woman who was detained by police in 2013 for driving a car despite the kingdom's ban on female drivers, delivered the petition in person to the Royal Court with another female activist on Sept. 26, bearing 14,682 signatures. And that's just the women who were willing to sign their full names. More signed anonymously.

All those signatures were bolstered by an estimated 2,500 telegrams sent directly to King Salman's office in the days leading up to the attempted submission. (Telegrams can be tracked to their location of origin, and the senders wanted to prove that they're Saudi citizens.) Staff at the Royal Court instructed the activists to submit the petition by mail instead.

Protesters organized this campaign almost entirely on social media, but it's rooted in two decades of work for women's rights in Saudi Arabia. Current support has been growing since July, when a Human Rights Watch report on the guardianship system spurred a movement that grew on Twitter, with a hashtag that translates from the Arabic as "Saudi women want to abolish the guardianship system." Supporters manufactured bracelets bearing the (again, translated) slogan "I Am My Own Guardian."

"In every aspect, the important issue is to treat a woman as a full citizen," Yousef told the BBC. She said that the petition's key demand is for the government to designate an age, from 18 to 21, above which a woman would be "treated like an adult."

This movement is part of a wave of change in the kingdom. Its government has twice told the United Nations that they would end the guardianship system due to human rights concerns; however, only smaller changes have been enacted so far. For example, in their municipal elections of December 2015, women voted — and registered as candidates — for the first time in the kingdom's history. And their sweeping plan for the future, Vision 2030, includes the goal of bringing more women into the workforce. (Learn more about Vision 2030, namely its goal of getting Saudi Arabia out of the oil industry, here.)

Not everyone agrees with the current petition. Other Saudi women have launched counterprotests, with an alternate hashtag that translates as "The guardianship is for her, not against her". These protests focus on maintaining the conservative values and family customs outlined in Islamic religious law. In 2010, a campaign with the (translated) slogan "My Guardian Knows What's Best for Me" gathered over 5,400 signatures on a petition of its own, calling for rejection of women's rights activism and a more mild reform of guardianship laws and customs.

It's a complicated issue that's difficult to understand from the outside. For more context, read this 2008 report from the United Nations' Human Rights Council.

As of this publication, there has been no official response to the petition from the government. But we'll be on the lookout. 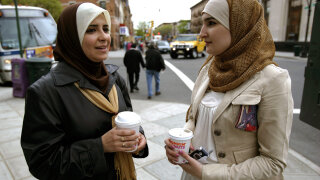 Stuff Mom Never Told You Podcast: Why Is Scandinavia So Great for Women?

Saudi Arabia Will Attempt to Lessen Its Addiction to Oil