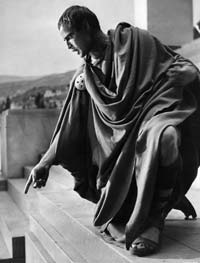 Marlon Brando as Mark Antony speaks to the Roman crowds during the funeral scene in "Julius Caesar" (1953).
Hulton Archive/Getty Images

Although there's no way of pinpointing the very first use of sarcasm, it has long been a staple in literature (along with irony and satire) as a source of humor or simply as a way to prove a point. Many Biblical scholars point to examples of sarcasm in the Bible. Ecclesiastes 11:9 reads "Rejoice, young man, during your childhood, and let your heart be pleasant during the days of young manhood. And follow the impulses of your heart and the desires of your eyes. Yet know that God will bring you to judgment for all these things" (New American Standard Version). Many Biblical scholars interpret this to mean "if you want to be judged by God, do whatever you want."

­William Shakespeare is well-known for his use of sarcasm. In the play "Julius Caesar," the character of Mark Antony gives a speech at the funeral of Caesar that begins, "Friends, countrymen, lend me your ears." In this speech, Mark Antony repeats the phrase "honorable man" several times speaking of Brutus, whose actions (murdering Caesar) have been anything but honorable. This repetition has the effect of completely inverting its literal meaning.

Writers use sarcasm to criticize everything from religion and government to philosophers and other writers. The 14th-century English author and poet Geoffrey Chaucer speaks of the Friar in "The Canterbury Tales" as a "wanton and merry" person who seduces women and accepts bribes. This is a sarcastic criticism of the clergy, who had become very corrupt.

Sarcasm was often employed by 18th-century French philosopher Voltaire. In his great satire "Candide," the titular character begins his journey by following the optimism of his teacher Master Pangloss, who believes that this world is "the best of all possible worlds." However, throughout the book Candide witnesses a myriad of tragic and terrible events. This illustrates Voltaire's sarcastic attitude towards the optimistic philosophers of his time.

Mark Twain was one of the greatest American sarcasts. He wrote his 1903 essay "Was the World Made for Man?" in response to Alfred Russell Wallace's promotion of the theory that the Earth is the center of the universe. Throughout most of the essay, Twain claims to agree with Wallace. But the essay ends by saying that just as the Earth was made for man, the Eiffel Tower must have been built for the skin of paint at its pinnacle, which demonstrates that Twain was being sarcastic when he initially agreed with Wallace.

When sarcasm is written instead of spoken, the reader must be able to tell from the context as there is no intonation to rely upon. This difficulty may be the origin of the axiom "sarcasm is the lowest form of wit, but the highest form of intelligence." Some writers have proposed the use of a sarcasm mark, an upside-down exclamation point at the end of a word or sentence to denote that it was intended to be taken as sarcastic. Sarcasm is often even less understood in online communication; ways of indicating sarcasm online include bolding the stressed word or phrase, putting it in quotation marks or even using faux tags like <sarcasm>thanks</sarcasm>.

For lots more information about sarcasm and related topics, try the links below.