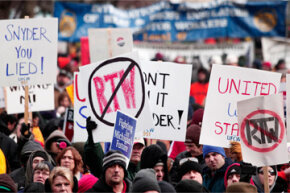 Union members from around the U.S. rallied at the Michigan State Capitol to protest a vote on right-to-work legislation on Dec. 11, 2012, in Lansing, Mich. See more protesting pictures.
Bill Pugliano/Getty Images

Proponents say businesses are more likely to locate in states with right-to-work laws, thus creating more jobs. Further, they note people should have both the freedom to join a union, and the freedom to decline to do so.

Opponents say right-to-work laws intentionally weaken union power, leading to lower wages. Additionally, they say that unless union dues are mandatory, employees too often will freeload by enjoying the benefits of a union (like collective bargaining power) without paying for them [sources: Pearson, National Right to Work Legal Defense Foundation, Hartfield].

Florida enacted the first right-to-work law in 1943. At the time, unions were quickly becoming a potent force in America, with membership doubling (percentage-wise) between 1935 and 1945 [source: Pearson]. In 1947, the Taft-Hartley Act was passed, which affirmed states had the right to pass right-to-work legislation. During the 1940s and 1950s, a flurry of states adopted it: Alabama, Arizona, Arkansas, Georgia, Iowa, Kansas, Mississippi, Nebraska, Nevada, North Carolina, North Dakota, South Carolina, Tennessee, Utah and Virginia. Eventually union membership stagnated, then plunged, and approval of right-to-work legislation petered out. Between 1963 and 2001, for example, only five additional states enacted it -- Wyoming, Louisiana, Idaho, Texas and Oklahoma [sources: Pearson, U.S. Dept. of Labor].

By 2012, union membership was still at historically low levels. But right-to-work laws are making a comeback. Indiana adopted the legislation on Feb. 1, 2012, followed -- astonishingly -- by union stronghold Michigan. Several more states are considering right-to-work legislation, and there are signs that a national right-to-work bill may be brought before Congress in the not-too-distant future [source: Koba].

It's important to remember adopting right-to-work legislation doesn't mean a state is anti-union, or that the two sides can't coexist. In right-to-work states, employees can still form unions, engage in collective bargaining and go on strike. Texas, for example, has a right-to-work law on its books, and is still home to Southwest Airlines, a company where 95 percent of the employees belong to a union [sources: Koba, Pearson]. Perhaps that's the most inspiring example of all.

Author's Note: What exactly is a right-to-work state?

In the 1980s, I worked in the Wisconsin State Legislature. Right-to-work legislation was routinely discussed, although it never passed. Actually, I'm not even sure any bills ever made it out of committee and to the floor for a vote. But in 2011, Wisconsin Gov. Scott Walker signed into law a bill prohibiting collective bargaining for most public workers, sparking massive protests much like those that occurred when Michigan Gov. Rick Snyder signed into law right-to-work legislation in December 2012. Times are changing in America's Rust Belt, that's for sure. 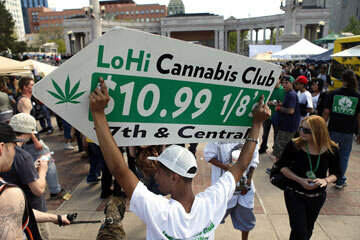 Up Next
What happens when a state law contradicts a U.S. federal law?
Explore More 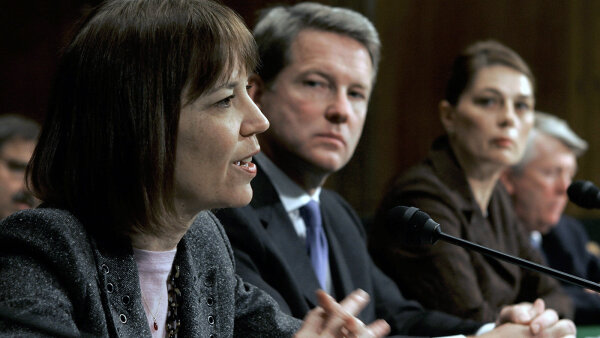 You May Like
Are There Limits to Freedom of the Press in the U.S.?
Explore More 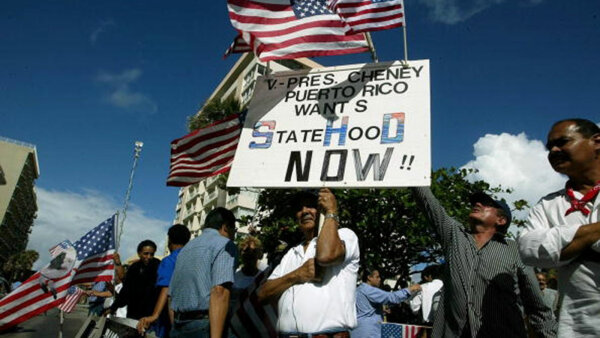 Keep Reading
How Do New States Become Part of the U.S.?
Explore More