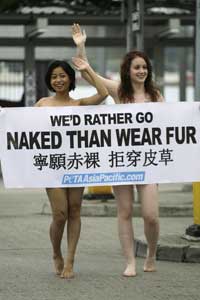 Ultimately, protest is all about drawing attention to a cause and communicating its message to anyone who will listen. As such, there are about as many different methods of protest as there are ways to grab someone's attention. Sure, it's hard to ignore a thousand sign-waving activists, but the same can be said for two naked women holding an animal rights b­anner.

People for the Ethical Treatment of Animals have earned quite a reputation for eye-catching methods of protesting social, political and industrial policies. Aside from nudity, the organization's members have also used costumes, fake blood, animal carcasses and intentionally unsettling takes on commercial ad campaigns designed to draw attention to their cause.

Shock and spectacle play frequent roles in protest. Pro-life activists wave photos of bloody fetuses in front of abortion clinics. In recent years, antiwar and antiglobalization protesters have favored carnival-like parades of puppets and effigies. In our media-obsessed age, a shocking or alluring image can circulate around the globe in a heartbeat. You might not have had an opinion on foxhunting in the United Kingdom, but you might click on an image of or topless protester in body paint.

The turbulent 1960s saw the explosion of popular protest music from the likes of Phil Ochs, Bob Dylan and Joan Baez. John Lennon, not content to merely sing for peace, staged a two-week "bed-in" against the Vietnam War. While protest music certainly enjoyed a resurgence at the time, it was far from new. Protest music has played a role in the women's suffrage movement of the 1800s in England and the American Revolution of the 1700s, and had been used to rally supporters behind social, religious and nationalist causes for centuries.